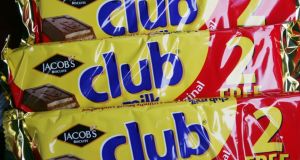 Dublin-headquartered Valeo Foods is the owner of the Jacobs biscuit brand.

Dublin-headquartered Valeo Foods has agreed to buy an Italian cake and biscuits company in a deal local reports speculated is worth about €200 million.

Valeo, the owner of the Jacobs biscuit brand, has agreed to buy Balconi from Italian private equity house, Clessidra, which owns 80 per cent of the business.

The deal, which was announced by Clessidra to local media yesterday, is expected to close in coming days.

Balconi, which sells a wide range of prepackaged cakes and snacks, operates from a large factory complex located about a half hour northwest of Milan.

It supplies the Italian market and also exports to a number of other countries including Spain, France, Germany and Britain. Clessidra’s statement yesterday indicated that Valeo will look to expand distribution of further into northern Europe.

The company has sales of about €200 million annually, and employs 180 staff. When consolidated into the operations of Valeo, which is run by former Aer Lingus executive Seamus Kearney, it will bring the Irish group’s turnover up to about €700 million with 1,000 staff, 800 of whom are based in this State.

The buyout is consistent with Valeo’s recent strategy of broadening its reach into Europe, reducing its reliance on the still-strained Irish consumer market.

The Clessidra statement did not include a price, but recent reports in Italy suggested Balconi’s annual earnings are about €25 million, and that it would be sold at a multiple of close to nine times earnings.

The statement said Bain & Company, the financial house founded by former US presidential candidate Mitt Romney, conducted the due diligence on the deal, while PricewaterhouseCoopers provided financial advice.

€60 million Valeo, which is controlled by the CapVest private equity house, co-founded by Cavan man Seamus Fitzpatrick, last April acquired Rowse, a UK honey brand. Later in the year, it spent about €60 million buying the Kelkin and Robert Roberts brands from the conglomerate, DCC.

The company has been touted as a potential candidate for a stock market flotation, although it is almost certainly likely to want to consolidate its recent purchases before it contemplates pulling the trigger on a share offering.