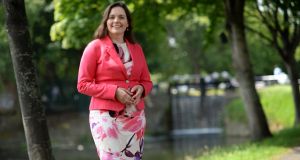 The caste of a lobbyist depends, in large part, on the social or moral standing of the thing for which they lobby.

What? Did you say you’re a tobacco industry lobbyist? Sorry, I’m busy. Don’t slam the door on your way out, you mercenary. Smoking kills kids, you know.

Or...You’re a lobbyist for a charity that feeds impoverished blind children in Africa? Oh, that’s fantastic. Come in, come in. And we absolutely MUST get a picture together for my Twitter feed before you leave. There’s an election coming.

For a decade until two months ago, Patricia Callan was the director of Ibec’s Small Firms Association. In corporate and political circles, small businesses are like the innocent. Every politician wants to be seen to be listening to their issues.

Her client base were seen as soft and cuddly, but Callan developed a reputation as a relentless, pugnacious, determined lobbyist.

Armed to the teeth with facts and figures and a steely demeanour if required, she graced many’s a Prime Time screen in debates opposite nervous politicians afraid of being seen as insensitive to the needs of SMEs.

Now, Callan, who in person is the epitome of calm and geniality, has crossed a Rubicon that flows through Ibec’s Georgian offices on Dublin’s Baggot Street.

She has taken over as director of the umbrella group’s Alcohol Beverage Federation of Ireland (ABFI), the trade association for the drink industry’s manufacturers and distributors.

In a nation obsessed with the pros and cons of the demon drink, the ABFI, in public policy and lobbying terms, is the vested interest, Big Drink. Its prominent members include booze behemoths Diageo and Heineken, while it also represents a number of smaller distillers and brewers.

Eight weeks into the job, Callan has already noticed that the winds are now a little chillier when she goes out to sell her message.

She feels that the public health debate around alcohol has swamped the industry’s positive economic message. Although its detractors would probably say that is exactly the way it should be.

“What’s really unusual in this job is that, sometimes, people don’t want to talk to you at all. But this is a booming sector, which supports over 200,000 jobs,” Callan says, referencing a number that includes people involved in the serving of alcohol in pubs and across the hospitality industry.

“The industry is completely underappreciated. Some of the [Irish] brands are leading lights around the world. Then there is the huge contribution to culture,” she argues.

She describes the drinks industry as the “export powerhouse” of the agri-foods sector with exports to 130 countries worth €1.4 billion. More than €1 billion will be invested, she says, in Irish whiskey distilleries from 2010 to 2025.

“You have to voice your own importance and tell the economic story – it hasn’t been told that well in the past. Get the numbers out. Tell people what we do.”

There are major economic and fiscal issues facing the drinks industry, such as the unquantifiable effects of Brexit and the industry’s ongoing war to secure a Budget cut in excise.

But most of the noise around the sector currently relates to the Public Health (Alcohol) Bill, which would impose tighter restrictions on the marketing and pricing of alcohol, with the aim of tackling abuse.

The Bill has been stuck in the legislative mud for the past two years, with no movement in sight. The public lobbying register details a surfeit of lobbying on the Bill by the alcohol industry, and by the industry’s opponents.

The impasse, at least, proves one thing: alcohol lobbyists might not be seen as being as pure as the driven snow, but when they blow hard enough, they can still freeze things over.

Callan believes it is a bad Bill that would damage the industry without achieving its public policy objectives. She highlights the fact – and it does appear to be a fact – that contrary to public perception, alcohol consumption in Ireland has actually been falling for a decade.

“It’s almost like being stuck in a moment in time,” she says. “Yes, we did have that time when misuse was much more serious than it is today. Look at the evidence base. A recent World Health Organisation report showed that, in 11 years, consumption in Ireland is down 25 per cent. People are staggered when I tell them that.”

The OECD, meanwhile, says Irish consumption is down by about 21 per cent since 2001. The Health Research Board highlights that, whatever about overall consumption, Irish people still drink at far higher levels (according to the OECD) than citizens of most other countries. Irish people also drink, on average, a fifth more than the amount recommended by the State.

“Every other week there is a report on alcohol and health issues,” says Callan. “But when you read beneath the headline-grabbing aspects, very often the detail of those reports is contradictory to ones that have gone before. Causal links get splashed across the headline. But when it comes to a report that says consumption is falling? It barely gets a mention.”

Callan believes the industry’s perceived bad rap on health issues pollutes its interactions with policymakers on unrelated matters. She gives the example of the industry’s push to promote whiskey-based tourism in Ireland – tourists visiting distilleries.

She says the numbers of such tourists could easily be boosted from the current 650,000 to up to 1.9 million. But she feels tourism policymakers, such as Fáilte Ireland, have been cool on the idea.

“The State agencies aren’t all over this just because it is drink-related. Parallel that [sort of reception] into every other [Government] department and you get the sense [that the industry isn’t all that welcome].

“We could boost visitor numbers. But because of the drinks industry thing, we can’t get State agency support, or tourism support. It makes no sense. We need to moderate that discussion.”

Whether it is on the provisions of the alcohol Bill, such as proposed advertising restrictions and minimum unit pricing, or other policies, Callan believes the industry should be given a seat at the table.

“Good policy is made by collaboration. It is made by listening [to the industry] on practical issues. What you don’t want to do is make laws that don’t achieve their public policy objectives and unnecessarily damage the industry.”

The alcohol industry’s opponents vehemently oppose allowing the industry any input into policymaking tent – the old fox in the henhouse argument.

On the economic side, Callan wants the Government to push for a relaxation of European State aid rules so that the Government can establish a fund to help smaller drink industry players who might be badly affected by Brexit, especially if there is a return to a hard Border or other obstacles to trade.

She says the industry is also seeking a 15 per cent cut in excise duty across all categories of alcohol – Ireland has some of the highest drink taxes in Europe. Callan argues that reduced excise would spur investment and jobs.

A 15 per cent budget excise cut would cost taxpayers an estimated €223 million, ABFI says. It would seem highly unlikely that its wish would be granted this year, with a housing crisis to be tackled, and Taoiseach Leo Varadkar’s preference to prioritise cuts in income tax.

Still, Callan will lobby hard for this and the other issues on the industry’s wish list, while also tending to the everyday requirements of her bustling trade association and the disparate needs of its 42 individual members.

Ireland isn’t Hollywood, and drink industry lobbying isn’t what is cynically portrayed in the 2005 movie Thank You For Smoking, which follows the travails of a wizened tobacco lobbyist, a drink lobbyist and a gun lobbyist.

But you sense that it is still a challenge in the current environment. One that Callan appears to be well up for.