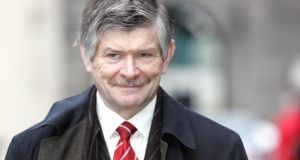 Publican Louis Fitzgerald said his staff were spending hours every day travelling long distances to and from work because of a shortage of affordable housing. Photograph: Cyril Byrne

Young emigrants should be offered a tax concession to entice them home to fill staff shortages in the pub trade, the businessman behind some of Dublin’s best known bars has said.

Publican Louis Fitzgerald, who owns the Stag’s Head, Kehoe’s and Bruxelles, said the bar trade was enjoying a resurgence since the post-crash years but finding staff was the sector’s biggest challenge.

He suggested the incentive of reduced taxes for young people who emigrated during the economic crash of 2008 to 2011 could encourage them to return home to take up vacant roles.

Housing and rental accommodation had become so expensive that reduced taxes for a period of time might serve as a draw to return, the Tipperary-born businessman said.

“Our biggest problem is staffing. There are so many young people who disappeared and went abroad during the recession and we were expecting them back but they never came back,” Mr Fitzgerald said.

“I think that maybe there should be some possibility, some tax concession, for people to entice them to come back in the first couple of years because housing and accommodation is another huge problem.”

The 73-year-old owner of the Quays pubs in Temple Bar and in Galway said his staff were spending hours every day and night travelling long distances to and from work because of a shortage of affordable housing.

“It would be different if we had a proper commuter system with trains,” he told The Irish Times, speaking last week at Punchestown Festival in Co Kildare, where he had sponsored a race.

The 2008 property and banking crash and subsequent economic recession led to the emigration of hundreds of thousands of young people. The number of people aged between 20 and 29 in the State declined by almost a quarter of a million in the six years after the crash. That amounted to almost a third of twentysomethings in the State.

Last year, for the first time in nine years, the number of Irish people returning to live in Ireland from abroad overtook those emigrating, though the numbers remain well below those who left after the crisis.

In the year to April 2018, 28,400 Irish returned, up 1,000 on the previous year, according to figures published by the Central Statistics Office.