Sales of Guinness up in Ireland but unchanged globally 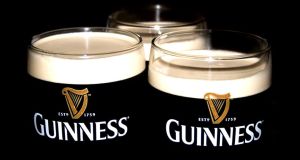 Globally, Guinness sales were flat in the 12 months to the end of June

Sales of Guinness rose 2 per cent in Ireland in the year ending June 30th but were flat elsewhere.

Meanwhile, sales of Baileys - the most popular cream liquer in Ireland - were unchanged locally but fell by 4 per cent globally.

New figures from Diageo show Guinness volumes rose 2.6 per cent in total trade in Ireland in the 12 months to the end of June with off trade growth rising 7.5 per cent. The group has a 34 per cent volume share for the on trade in the Republic and a 19.8 per cent share in the North.

Globally, Guinness sales were flat with Diageo saying that the brand performed well in both the US, with sales up 3 per cent, and in Western Europe, where sales rose by 2 per cent. The group attributed the jump in sales in both regions to the success of newer products such as Blonde American Lager and Dublin Porter.

In Nigeria - a key market for Guinness - sales declined but performance improved over the course of the year and volume share stabilised. Sales also declined in Indonesia due to adverse regulatory changes, Diageo said.

The drinks giant reported an increased interest in Gin in Ireland with Gordon’s growing 1.7 per cent in volume, fuelled by a 7.4 per cent rise in on trade volumes.

Overall, net sales in spirits were down 2 per cent in Ireland which Diageo said was due to last year’s duty increase.

Diageo, which is the world’s largest spirits company, with brands that also include Smifnoff Vodka and Johnnie Walker Scotch, forecast a return to sales growth after reporting revenue that was unchanged in the 12 months ending June 30th.

“Diageo has an enviable position, by geography, by brand and by category range, in an attractive consumer market place with strong long term growth drivers. This year we made further changes to build strong, sustained performance including embedding our sell out discipline, improving cash conversion and strengthening our route to consumer. We have consistently applied a long term perspective in making these changes, despite the short term challenges we have faced from an external environment where currency volatility continues to impact the emerging market consumer,” he added.