Maker of Peroni and Grolsch reports operating earnings of $6.37 billion 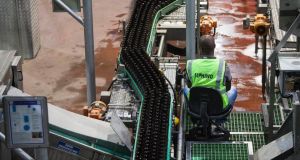 A worker monitors beer bottles as they move along a conveyor belt on the automated beer bottling plant at SABMiller’s brewery in Cape Town, South Africa. Photo: Bloomberg

SABMiller reported full-year profit above analyst expectations as performance picked up in the latter half of the year, but said trading would continue to be tough in its new financial year.

The maker of Peroni, Grolsch and other beers reported operating earnings fell 1 per cent to $6.37 billion in the year ended March 31, above analysts’ average estimate of $6.23 billion, according to a consensus compiled by the company.

Net producer revenue fell 2 per cent to $26.29 billion, also ahead of analysts’ estimates of $26.23 billion. Excluding the impact of currency fluctuations, revenue was up 5 per cent and earnings before interest, tax and amortisation (EBITA) was up 6 per cent, helped by price increases and cost cuts.

The strong US dollar reduced the value of international sales and profits and increased raw material costs since commodities are often traded in the US currency.

SAB had already reported that worldwide beer volume was flat last year, with soft drink volume up 8 per cent.

Growth in Africa and Latin America was offset by weakness in North America and China, though China returned to growth during the last three months of the year.

Looking ahead, the company said it expected the trading environment to stay challenging and that its business would continue to be hit by currency volatility.

“However, we are confident in our strategy to drive superior long-term growth,” the company said, without giving a specific forecast.

“We’re giving a sense of confidence over the longer term but we’d rather avoid short term forecasts,” chief executive Alan Clark told reporters. “Things can shift so quickly in the short term that it’d just be too risky for me to give a forecast.”