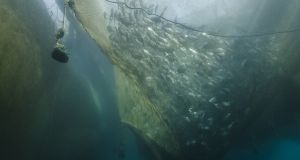 A dispute over the €1 million sale of a stake in a company backed by State agency Udarás na Gaeltachta is heading for the High Court in the autumn.

The deal left state body Udarás na Gaeltachta and Bradán Muhr Teoranta with 50 per cent each in Bradán Beo. Before the transaction, each had held 30 per cent of the business.

The shares bought by Bradán Muhr Teoranta were subsequently cancelled. Udarás na Gaeltachta was not involved in the transaction.

However, it has since emerged that shareholders in Maoiniu Mara, led by the Irish Seafood Producers’ Group (ISPG), are unhappy with the sale as they believe the €1.05 million price seriously undervalued the 40 per cent stake in Bradán Beo.

The dispute has led to legal action involving Bradán Beo, ISPG and other shareholders including Curraun Fisheries and Mannin Bay Salmon Company. The issue came before the High Court last week and is set for a full hearing in October.

Some Maoiniu Mara shareholders believe the price should have been four times the €1.05 million paid, based on Bradán Beo’s recent financial performance.

They sought a general meeting of Bradán Beo to pass a special resolution that would give them a share of the fish farm operator’s future profits, effectively reversing the impact of the deal.

Bradán Beo went to the High Court to get an order preventing the shareholders from going ahead with their bid to get the resolution passed. The court will deal with this issue in October.

Udarás na Gaeltachta is not involved in the court case as the dispute involves Bradán Beo and Maoiniu Mara shareholders. A spokesman for the State body said it would not comment on the dispute as it was before the courts.

Representatives of the Maoiniu Mara shareholders on either side of the dispute also said it would be inappropriate to comment. Sources indicated on Monday that it could still be possible for the parties to reach a settlement before the case goes to trial.

Bradán Beo is based in Cill Chiarán Bay in Galway, where it operates salmon farms and hatcheries. It is one of the more successful and better-known businesses in its sector.

Recent figures indicate it has been trading profitably. Its latest accounts show shareholders’ funds were €3.75 million on July 3rd, 2016, more than €1.8 million more than 12 months earlier when they stood at €1.945 million.

While it is not yet due to file accounts for the financial year just ended, it is understood that the company’s performance was even stronger during that period.

The ISPG is an organisation of organic salmon farmers, also based in Cill Chiarán. Udarás na Gaeltachta is the State organisation responsible for supporting and promoting gaeltachts, districts in the Republic where Irish remains the day-to-day language.