Rémy Cointreau upbeat as demand in China and US improves 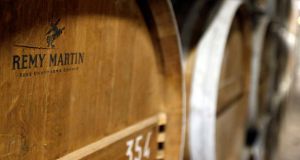 French spirits group Rémy Cointreau expressed confidence in year-end profit targets on Thursday after a recovery in demand for cognac in China and in its main US market boosted half-year results.

The maker of Rémy Martin cognac and Cointreau liquor, which is trying to sell more of its higher-priced spirits to boost profitability, said it planned to accelerate advertising and promotional spending in the coming five years to boost sales.

“We are only at the start of an adventure that will be more sustainable and healthier,” chief executive Valérie Chapoulaud-Floquet told reporters.

Chief financial officer Luca Marotta said he was “comfortable” with the consensus of analysts’ estimates for full-year like-for-like operating profit growth of 8-9 per cent, after first-half operating profits rose 7 per cent.

The first ever store the group has dedicated to its $3,000 (€2,840) per bottle Louis XIII cognac in Beijing was performing “well above targets”, two months after its opening, she added.

Demand was also picking up in Russia as consumer confidence improved in that country, although it was more subdued in Africa, Ms Chapoulaud-Floquet said.

“Rémy is well-placed to benefit from the global premiumisation trend in spirits. China may be turning the corner at last,” said analysts at brokerage Liberum analysts.

Similar to other spirits makers, including larger rivals Diageo and Pernod Ricard, Rémy Cointreau has faced pressure on sales of cognac and other luxury goods in China following a government crackdown on luxury gift-giving and personal spending by Chinese civil servants.

The Rémy Martin cognac division, which accounts for 80 per cent of group profit, saw operating profit rise 9.1 per cent on a like-for-like basis to €101.9 million, with brands such as 1738 Accord Royal and Louis XIII performing well in the United States and China.

The Chinese government’s crackdown has led to significant changes across the group, with Rémy Cointreau moving more towards the United States, which now contributes 38 per cent of group sales compared to around 20 per cent for China. – Reuters