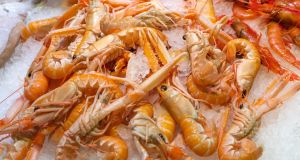 A new methodology had led the Minister for Agriculture Food and Marine to issue a closure order from November 2017 over a particular section of sea off the west coast. Photograph: iStock

The Supreme Court has asked the Court of Justice of the EU (CJEU) to determine questions concerning an appeal by two fishermen over the way the fishing authority calculated catches of prawns in order to conserve the species.

In 2018, the High Court dismissed a challenge by Pat Fitzpatrick, who fishes out of Ros a Mhil in Galway, and Michael J Flannery, of Dingle, Co Kerry, over the methodology used by the Sea Fisheries Protection Authority (SFPA) to assess catches, which then dictates whether EU quotas had been reached.

A new methodology had led the Minister for Agriculture Food and Marine to issue a closure order from November 2017 over a particular section of sea off the west coast, known as functional area 16, to fishing for Nephrops, known as Dublin Bay prawns, Norway Lobster, scampi or simply prawns.

The fishermen, who said they were paying mortgages on their vessels and employing 12-14 fishermen between them along with more people onshore, said the decision was causing them serious hardship and might even put them out of business.

They sued the Minister for Agriculture, Food and Marine and the SFPA. The defendants stood over the methodology used to assess catches.

The SFPA said there was a serious problem of Irish fishermen under-reporting in their personally entered electronic fishing logs the amount of prawns actually caught in functional area 16.

It said that the problem was of such grave proportions that in order to comply with EU law to provide accurate information, it had to employ a methodology whereby it calculated the catches based on the actual time spent by a vessel at sea rather than what was in the fishing logs.

As a result, while the overall logged catch up to October 2017 was 733 tonnes, the figure assessed by the SFPA was 1991 tonnes. The quota was therefore reached and the fishing area was closed.

They appealed, arguing, among other things, that the new methodology of calculating fishing outtake was not in line with a 2009 EU regulation system for ensuring compliance with the rules of the common fisheries policy and was therefore in breach of Ireland’s obligations under EU law. They also sought a reference of the matter to the CJEU.

The Minister opposed the reference and also argued the two fishermen’s application should have been brought in the names of their companies and they did therefore not have standing (locus standi) to take it.

The SFPA also said a reference was not required as the law on the matter was clear enough.

On Friday, a five-judge Supreme Court ruled a reference should be made to the CJEU.

Mr Justice William McKechnie, on behalf of the court, said it did not follow simply because the men’s companies could have taken the case, that they themselves do not have standing. He was satisfied both men satisfied the test as to standing under court rules.

In relation to a reference to the CJEU, he said the major issue of EU law which arose here is whether the SFPA can lawfully utilise other data flows such as fishing licences, fishing authorisations, vessel monitoring system and other material when calculating the figures (for catches.

There should be no disparity between one state and another in relation to ensuring compliance with the 2009 regulation, he said. In his view the law was not clear enough (acte clair) and the interpretive issues raised in this case were central to it.

The judge therefore proposed referring to the CJEU two questions on the matter.

The first relates to whether a fishing authority is limited to notifying the data on a catch in a particular fishing ground logged by fishermen/women under EU regulation, when that authority has good reason to believe that data is grossly unreliable, or is it entitled to employ reasonable scientifically valid methods to achieve more accurate figures.

The second asks, where an authority is so satisfied based on reasonable grounds, can it lawfully utilise other data flows such as fishing licences, fishing authorisations, vessel monitoring system data, landing declarations,sails notes and transport documents.

1 Two men face fraud charges over £1.2bn sale of Nama’s NI loans
2 Wifi problems? Quick tips to get your home internet out of the slow lane
3 Covid-19 has distracted us from the looming threat of Brexit
4 TikTok to invest $500m in data centre and create ‘hundreds of jobs’
5 Beauty and the fleeced
6 Project Eagle: What was it and why is it in the news?
7 Microsoft now looking to acquire TikTok’s entire global business
8 Hong Kong family backs Central Bank building buy
9 Will spouses have access to joint account after one dies?
10 Help, I’ve no PRSI stamps – can I still get a pension?
Real news has value SUBSCRIBE