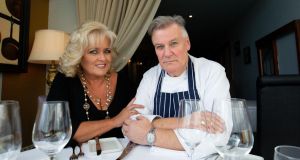 Derry and Sallyanne Clarke: their new business venture will see them partner in a facility which can seat 80 in the restaurant area and 120 in the bar. Photograph: Tom Honan

If there’s one thing l’Ecrivain restaurateurs Derry and Sallyanne Clarke don’t like, it’s Tripadvisor. As an outsider, one would think criticism rarely darkens their door and, even if it does, they’ve satisfied some of the toughest critics around by winning and holding on to a Michelin star for 17 years.

But disapproval from the oft virulent reviewers on the travel site really seems to stick in their craw.

1 Coronavirus: Varadkar returns to practising medicine to help during crisis
2 Coronavirus: Boris Johnson in hospital for tests as symptoms persist
3 Restarting Ireland: When and how will we ‘get back to normal’?
4 Donald Trump’s clown car administration has put the fear in all of us
5 Fewer deaths in Veneto offer clues for fight against coronavirus
6 Robbie Lawlor profile: A feared criminal with a long list of enemies
7 Dublin criminal Lawlor may have been shot dead by man who owed him money
8 Coronavirus: Number of Irish cases nears 5,000 as 21 further deaths confirmed
9 Tuberculosis vaccine ‘potential game-changer’ in Covid-19 fight
10 Queen Elizabeth invokes spirit of second World War in speech
11 Mary Lou McDonald: This crisis shows that Sinn Féin was right
12 An ‘Asian flu’ pandemic closed 17 Dublin schools in 1957
13 Coronavirus: Co Tyrone couple buried together after dying 20 hours apart
14 Infected but feeling fine: the unwitting coronavirus spreaders
15 Man City to investigate Kyle Walker over lockdown sex party
16 Coronavirus lockdown steps could remain into winter, says expert
17 Five men charged after garda car attacked at Traveller halting site in Cork
18 What is Houseparty, the app everyone’s talking about – and not in a good way?
19 Coronavirus: Offer of arts grants ‘ill-conceived and tone deaf’
20 Unions again urge change in wage subsidy scheme
21 Nurses warn significant numbers will not be able to work without childcare
22 Covid-19 testing: Irish pharma firms source raw material to make reagent
23 US braces for ‘hardest, saddest’ week as coronavirus deaths surpass 9,300
24 Are holidays booked for July and August going to happen?
25 Seán Moncrieff: I’m sick of hearing this is the new normal
26 Chris Johns: A shopping list for the post-Covid-19 world
27 Is ‘herd immunity’ a health policy or a by-product of spreading infectious disease?
28 Fintan O’Toole: Earth has a toxic virus – us
29 David McWilliams: We must loosen up on financing pandemic spending now
30 Coronavirus: Consultant fears his patients may ‘go blind’ due to loss of private care
31 Potential Robbie Keane exit could prove costly for FAI
32 Man shot dead in Belfast was suspect in Keane Mulready-Woods murder
33 Meet the Varadkars: ‘Handsome, beautiful 38-year-old doctor becomes PM of Ireland’
34 Belfast phone mast hit by arson after claims over 5G link to coronavirus
35 A letter to Ireland from Italy: this is what we know about your future
36 Half of Dublin’s Catholic priests cocooned due to Covid-19 measures
37 Netflix has revealed its most-watched content. You might be surprised
38 Man arrested after reportedly threatening staff in Dublin shop
39 ‘We’re fine up here, Ross. I just can’t imagine this thing coming to Foxrock’
40 Coronavirus: Situation in Ireland ‘misrepresented’ because of limited testing
Real news has value SUBSCRIBE