Over 80 jobs for Drogheda with new distillery and brewery 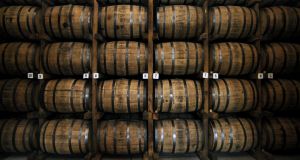 More than 80 jobs are to be created in Co Louth with the opening of a new distillery and brewery in Drogheda.

More than 80 jobs are to be created in Co Louth with the opening of a new distillery and brewery in Drogheda.

Opening next year, the new €20 million facility will include a whiskey distillery, a craft brewery and taproom. It will also have a visitor centre with a 120-seater restaurant.

With plans to produce whiskey, gin and a range of craft beers for the domestic and export market, beer production is already underway in the 50,000sq ft building.

The Boann Distillery and Boyne Brewhouse is backed by Pat Cooney, who previously built the Gleeson Group into a major player in the manufacturing and wholesale drinks business. The Gleeson Group was sold to C&C in 2012 i a deal that netted €12.4 million for the Cooney family.

Internationally renowned master distiller, John McDougall, is consultant distiller to the project and will be working closely with Áine O’ Hora, head distiller and brewer.

Mr Cooney, his wife and four of their children are all actively involved in running the business.

“I’ve been in the drinks industry for the past 40 years and it has been a nagging ambition to establish a Distillery of my own. To be able to realise this ambition, with the encouragement and participation of my wife and family, is a great bonus and to be able to establish this project in this super building in my home town is a multiple bonus,” said Mr Cooney.

Drogheda was once home to eighteen local distilleries, which slowly declined to just one by 1822.

1 Aldi empire wracked by family feud
2 NatWest considers closing Ulster Bank in the Republic
3 Q&A: What’s this about a cheap new mortgage and can I switch?
4 Will PTSB be Ulster Bank’s knight in shining armour?
5 Volkswagen close to selling its Bugatti supercar brand
6 EY Entrepreneur of the Year awards: meet four industry finalists
7 NatWest confirms review of Ulster Bank as Covid-19 bites
8 Eason faces a defining chapter in its long history
9 TikTok weighs plan for up to 5,000 workers in Dublin offices
10 How Ireland managed to green the White House
Real news has value SUBSCRIBE