New dawn for farm tech: sowing the Internet of Things into agriculture

Ireland’s biggest export is food and some of its largest companies are food-related, offering huge opportunities 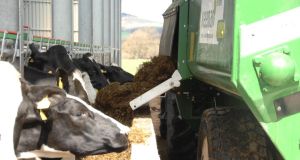 The Keenan Systems mixer. The company develops feeding machines, which are used by thousands of farmers from Canada to China, to give their livestock the optimal mix of food. The machines are connected to the cloud allowing for a real-time feed of information 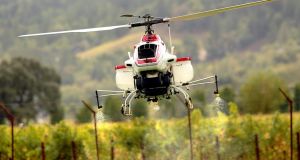 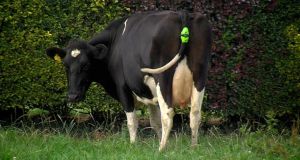 Moocall sensor on a cow.

Did you hear the one about the connected cow? It might seem like a joke, but thanks to advancements in big data, technology and the Internet of Things, a new era of farming is emerging.

Cows are being connected to the internet to help track the animal’s health and improve their milk yield. This is done by placing special electronic collars on the cattle. The collars contain a wireless sensor that transmits data about the animal’s health and the amount of milk being produced back to a central computer or device.

That’s not the only way cows are being incorporated into the Internet of Things era of people, animals and objects all connected to the web. Wireless sensors attached to cows’ tails can alert a farmer when a cow is going into labour, while radio-positioning tags can monitor a herd’s behaviour. If an animal starts behaving differently, the farmer can easily locate it to make sure it is not lame or sick.

Farming is in the middle of a digital revolution. Along with connected cows, there are smart irrigation systems, wireless fencing systems and sensors that monitor temperature and moisture in soil.

“The farming sector is being transformed by technology,” Moocall chief executive Emmet Savage says, adding: “The labour-intensity of tasks like milking is significantly reduced by technology such as robotic milking parlours.”

Moocall is among the Irish companies leading the way in farming and agri-tech innovations. The company’s calving sensor warns farmers when a cow is one hour from birthing to ensure cow and calf are cared for in the event of a difficult birth.

“Moocall came about four years ago when farmer Niall Austin lost a cow and calf due to a difficult birth and the fact he wasn’t with the animal when it was born,” according to Savage.

He says the device works by monitoring the movement of a cow’s tail in order to predict when labour is imminent, which is a world first. Farmers no longer need to monitor CCTV or visit calving sheds, as the Irish-designed device will send a text message when the cow is going into labour.

The company is exporting the smart calving device, which can pick up event the weakest of network signals, to the UK, Europe, New Zealand, Canada, the US and Australia. “The device has a signal even in low reception areas. This was important to us because of the remoteness of some farms,” Savage says.

With labour costs rising and technology costs declining, machinery is also embracing the Internet of Things. The name John Deere might be associated with tractors, but the company has also developed a huge fleet of interconnected machines ranging from balers to planters and harvesters.

Guided by sensors, geolocation data and cloud-based software, these machines can drive themselves, inject fertiliser at precise depths, automatically space seeds based on soil fertility and measure harvest data in real time.

Similarly, Japanese manufacturer Yamaha is better known for its motor cycles and marine products, but it is also making unmanned aerial vehicles or drones for crop-spraying. The company says 2,500 of these vehicles are currently being used to spray more than 2.5 million acres of Japanese rice farms, and it recently got regulatory approval to begin supplying the drones to farmers in the US.

While crop-spraying drones aren’t new, Carlow farmers Paul and Declan Brennan have taken a rather novel approach to unmanned aerial vehicles. The two brothers decided to deploy Shep – the world’s first sheepdog drone – after Declan’s sheepdog suffered an injury which left him lame.

The drone can move Declan’s herd of 150 sheep quickly and easily from one field to another, and costs significantly less than a sheepdog.

Agriculture is Ireland’s biggest indigenous sector, accounting for approximately 10 per cent of exports and 7.7 per cent of employment. This, combined with the rise of technology companies and start-ups in Ireland, is contributing to Ireland’s success in agri-tech.

One Irish company that has had a global impact when it comes to farm technology is Keenan Systems. The company develops feeding machines, which are used by thousands of farmers from Canada to China, to give their livestock the optimal mix of food. The machines are connected to the cloud allowing for a real-time feed of information to the Keenan control centre in Co Kilkenny, where it is analysed.

John McCurdy, innovation director with Keenan Systems, says the system allows the company to work proactively with farmers to address anomalies before they become a major issue.

For example, a farmer in New Zealand might have a greater moisture content in the mix than one in Wales and this is catered for by the system.

“We found that farms were being flooded with data, but only 5 per cent to 10 per cent of our customers were actually making use of that data. Moving our technology on to the cloud has given us the ability to work with more people and make it simpler for them.”

He says all the data from 3,000 farms around the world comes back to the Kilkenny centre, where it is analysed by software.

“The software identifies issues such as changes in the composition of the food or milk. We can then remotely make changes to the machine and one of our nutritional advisers can also guide the farmer through the issue”.

From digital collars on animals to robotic milking parlours, McCurdy believes the future of farm technology will be a virtual network of data sources.

“The network will bring them all together, adding value not just to the farmer but to the supply chain.”

As well as virtual networks of farm machinery and devices all communicating with each other, the future will also be also be about functional foods, according to Nuritas founder Nora Khaldi.

She says innovation in the food and farming sectors comes at a pivotal time.

“People won’t just buy foods for taste and energy. The food will help them with diabetes, cognition, mood, gut etc,” she says. “If someone has an exam, they can eat a cereal bar that will help with cognition. Nuritas is a Dublin-based start-up which data mines food to discover peptides – amino acids – that contain beneficial health properties.

“The health system is not working,” Khaldi adds. “There is an urgency to find solutions for these problems. The best molecule in foods can tackle these problems. We look at molecules in food and identify life-changing ones with therapeutic qualities.”

This week, Khaldi will address the Irish Technology Leadership Group (ITLG) Silicon Valley Global Technology Summit in Dublin on the subject of agtech and reinventing the farm.

ITLG founder John Hartnett says the agtech revolution is being driven not only by increased labour costs, but water shortages and less land. “The system is already constrained as arable land has reduced by 50 per cent since 1960 due to population growth.”

He says the middle-class today represents 1.2 billion people worldwide, with that figure set to increase to 4.5 billion by 2050. “That demographic is aware and savvy when it comes to the connection between fresh food and health. This major demand on one hand, and supply and labour constraints on the other had are creating the perfect storm for tech and innovation to play a role in food and farming.

“Once upon a time it was all about social media, now big firms are looking at agri-tech. One of the world’s leading investment firms – Kleiner Perkins – the company which backed Google and most other major firms in Silicon Valley, has said farming is the future. Google Ventures has invested $15 billion in Farmers Business Network.”

He says Ireland is sitting on the cusp of a huge opportunity in agri-tech. Ireland’s biggest export is food and some of its largest companies, such as Kerry and Glanbia, are food-related. It has also become the Silicon Valley of Europe. It’s just a matter of combining the two.

G20 trade chiefs pledge to try to keep supply chains open 07:59
UK economy stagnated in fourth quarter, amid turmoil over Brexit 07:48
Asian stocks mixed as US futures swing to a loss 07:34
Microsoft starts online seminars for DreamSpace students 07:20
How to budget your way through financial realities of Covid-19 06:39