Nestlé to reduce sugar content in chocolate bars by 10% 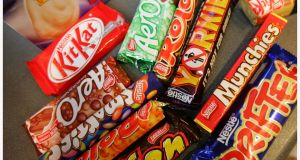 Nestlé products: 400 tonnes of sugar to be removed across several brands in Ireland. Photograph: Bryan O’Brien

Nestlé has announced plans to reduce the amount of sugar in its confectionery by 10 per cent by the end of next year.

The company, which produces lines such as Aero and KitKat, said it would be reducing the sugar content in its chocolate bars by 10 per cent.

The Swiss food company said the move would see some 400 tonnes of the ingredient removed across a number of brands in Ireland, largely by replacing it with higher quantities of existing, or other, non-artificial ingredients.

“Our confectionery brands have been enjoyed in the UK for more than a century and we know that if we can improve these products nutritionally, provide more choice and information for the consumer, together with other categories, we can have a significant impact on public health,” said Fiona Kendrick, chief executive of Nestlé UK and Ireland.

“These innovations will help us to reduce sugar in confectionery when they are combined with other, more common methods, like reformulating recipes and swapping sugar for other, non-artificial ingredients.”

Last month the company said it would be targeting a 2-4 per cent underlying sales growth this year after net profit fell and sales did not rise by the amount expected in 2016.

1 Restaurants file court actions against insurers over lockdown losses
2 Columbia Sportswear defies gloom with first Irish standalone shop
3 Ireland faces 'deep downturn' this year and may not rebound until 2024 if there is a second wave
4 ‘The rental situation stops me moving back home’
5 Home or car: what’s the best use of my savings?
6 How much do Irish people earn? And what will Covid-19 do to our wages?
7 Could your old car be giving away all your secrets to its new owner?
8 VAT cuts are for businesses – consumers will still pay the same
9 How to further divide the economy using the wage subsidy
10 House prices fall 3% in three months, says MyHome.ie
Real news has value SUBSCRIBE