Nestlé to pay FoodCloud to save surplus food from landfill 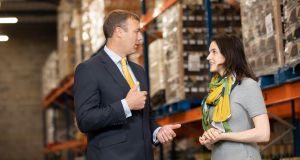 FoodCloud has signed a deal with Nestlé that sees the company not only providing it with surplus food to redistribute, but also paying the social enterprise to take it away.

The move, a first for an Irish food supplier, is intended to create a new sustainable income stream for the award-winning not-for-profit. It is hoped that other industry partners will follow suit.

Under the agreement, Nestlé Ireland is to provide a per pallet financial contribution to FoodCloud to cover the costs to manage, store and redistribute surplus food, ensuring that it goes to charities, rather than to landfill.

“We operate a robust and rigorous supply chain system that is designed to reduce surplus stock, however surplus stock does occur from time to time. Rather than having perfectly good food go to landfill, our products will go to people who will benefit from it,” said Andrew Shaw, country manager at Nestlé Ireland.

FoodCloud was cofounded by Iseult Ward and Aoibheann O’Brien in 2013. It has developed a software platform that enables businesses to redistribute surplus food to charities via its redistribution hubs in Dublin, Cork and Galway.

The group is also operational in the UK. Almost 2,000 businesses provide surplus food to the company, including big grocery chains such as Tesco and Waitrose.

Since FoodCloud was established, more than 37 million meals have been provided to more than 7,000 charities across Ireland and the UK.

“Nestlé’s commitment to making a per pallet contribution is a monumental step towards FoodCloud hubs creating a sustainable income stream to cover our day-to-day administration and operating costs,” said Ms O’Brien.

“This will help us to expand our impact, rescue more surplus food and work with more charities across the country,” she added.

FoodCloud’s co-founders received a special contribution award at the 2017 EY Ireland Entrepreneur of the Year Awards for its work. Ms Ward was also last year named on Forbes’s prestigious “30 under-30 Europe” list of leading innovators, entrepreneurs and leaders.

1 How safe is it to go back to the office?
2 Elderly parents living in property you own will save you on capital gains tax
3 More than 40% of help-to-buy recipients already had deposit
4 Most workers now expect choice to work from home part-time
5 Regeneron says its antibody cocktail prevents and treats Covid-19 in animals
6 Construction workers among first PTSB borrowers off payment breaks
7 Owner of Dundrum Town Centre to sell prized assets
8 56 financial firms entered or expanded Irish operations in 2020
9 Cinema tensions laid bare by deep crack in theatrical release windows
10 EU may delay digital tax proposals, official says
Real news has value SUBSCRIBE