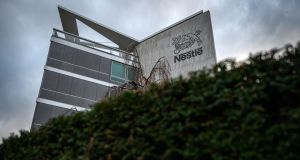 Food company Nestlé said it will invest 3.2 billion Swiss francs (€2.95bn) over the next five years in an effort to fight climate change.

The company will plant 200 million trees over the next decade and help farmers and suppliers shift toward regenerative agriculture, the KitKat-maker said on Thursday. That practice improves soil health and protects ecosystems.

Earlier this year Nestlé said it plans to spend as much as2 billion Swiss francs in an attempt to push the plastics industry to address the dearth of recycled packaging that is safe to use for food.

In February Danone announced a €2 billion sustainability investment over the next three years.

Nestlé also said it plans to get 100 per cent of its electricity from renewable sources at its 800 factories within the next five years, and will expand its offering of plant-based food and beverages.

Nestlé last year set a target to reach zero net greenhouse-gas emissions by 2050 as chief executive Mark Schneider said climate change was one of the greatest risks to the company’s future business.