Swiss food giant employs around 750 people in the Republic 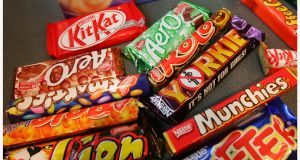 The Irish arm of Swiss food giant Nestlé made a pre-tax profit of nearly €39 million last year, down from €344 million in 2017, according to recently filed accounts.

However, the 2017 figure relates to an exceptional €957 million dividend paid to it by Wyeth Nutritional, a recent Nestlé acquisition.

Nestlé acquired Wyeth from Pfizer in an $11.85 billion (€10.1 billion) deal in 2012. The Wyeth group employed 4,000 people at that time, including around 600 at its Irish operation in Askeaton, which produces infant formula.

Wyeth paid out the dividend after several years of strong sales , particularly in China.

Nestlé, which includes Nestlé Ireland and other subsidiaries, employs around 750 people in the Republic, manufacturing over 70 brands across seven categories, including beverage, confectionery, cereals, food, pet care, dairy and infant nutrition.

The latest accounts show the Irish subsidiary made a profit on its own activity for the first time in several years.