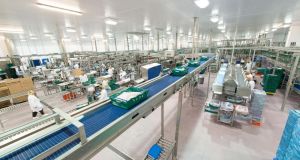 A view of a Moy Park plant. The poultry producer has been sold by its owner to a Brazilian company in a deal worth €1.32 billion. Photograph: Brian Hallam/Moy Park

Moy Park, Northern Ireland’s biggest private employer, has been sold by its Brazilian owner to a local rival in a deal worth €1.32 billion.

Debt-laden meatpacker Marfrig says it is selling the Craigavon-based poultry producer which employs 8,500 people in Northern Ireland to fellow Brazilian company JBS in order to pay down debt.

The deal marks a major push into Europe by JBS, the world’s biggest meatpacker, which as well as operations in Brazil also owns processing plants across South America and in the United States, Canada, Australia and Mexico. Until the deal was announced on Sunday night JBS had stood aloof from the European market where to date it only has a solitary beef operation in Italy.

Its purchase of Moy Park automatically makes JBS the UK’s biggest poultry producer and gives it a foothold in Europe’s rapidly growing prepared foods market with operations in France, the Netherlands and England where it produces a chicken range for celebrity chef Jamie Oliver.

As part of the deal it will also acquire Walsh Family Foods, maker of famous Dublin delicacy the spice burger.

Backed by Brazilian state banks JBS has gone on a global buying spree since 2007 spending around €6 billion on such high profile purchases as US meatpackers Pilgrim’s Pride and Swift.

Marfrig also went on a foreign spree which as well as the 2008 purchase of Moy Park included the 2010 deal to buy US meatpacker Keystone. But this has left it overleveraged and, weighed down by debts of €4.5 billion, it has been selling off units in a bid to restore itself to financial health.

Moy Park has long been viewed as the healthiest operation it owned and its Brazilian parent had planned to list the company in London in order to raise cash. But it shelved the idea of an IPO citing the glut of new listings on the LSE last year.

The strategic importance of Moy Park to Northern Ireland’s economy saw first minister Peter Robinson and deputy first Minister Martin McGuinness visit Marfrig headquarters in São Paulo in 2013 to meet with executives and try and ascertain their plans for its operations in the North.

The terms of the deal will see JBS pay €1.05 billion in cash and take on Moy Park’s debts. The two companies say they expect the deal which requires approval from European antitrust regulators will be concluded by the end of the year.