McEntee urges US to refrain from new Irish and EU tariffs 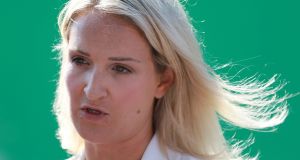 The Minister of State for Europe, Helen McEntee, has urged the United States to refrain from imposing new tariffs on Irish and European goods, as she described the deepening trade war between the US and the European Union as “counter-productive”.

Speaking in Washington ahead of meetings with senior figures on Capitol Hill and business leaders, Ms McEntee said Washington’s threat of new tariffs is harmful to businesses and consumers.

“I think the imposition of tariffs that we have already seen . . . is shortsighted. It’s counter-productive because the only people that it harms is our businesses and our citizens.”

Her comments come amid renewed concern that Irish whiskey could be in line for new punitive measures from the US after the Trump administration warned this week that it may introduce new tariffs on European products. The warning follows a World Trade Organisation ruling on Monday that Europe has not complied with an order to end illegal subsidies to aircraft manufacturer Airbus.

Earlier this year, the Geneva-based body gave the United States the green light to impose trade measures worth up to $7.5 billion (€6.8 billion) over what it ruled to be illegal subsidies given to Airbus by the EU and individual European countries.

The US responded with tariffs on a range of European products, including Irish products such as butter and liquors. Though Scottish whisky was also hit by 25 per cent tariffs, Irish whiskey was exempt. But the US warned on Monday, after a follow-up WTO ruling, that it now considering subjecting additional EU products to the tariffs.

Irish officials in Washington and representatives of the Irish Whiskey Association and other food groups are increasing their engagement with decision-makers in Washington amid fears that more Irish products could be hit.

Ms McEntee, who is due to meet with the American Chamber of Commerce this week in the US capital, called on the EU and the US to negotiate. She noted that the WTO is also considering a case involving Boeing, amid allegations that the US has engaged in unfair subsidising of the American company. EU sources say that Brussels is awaiting that decision early next year, in the belief that it will increase the EU’s leverage on the matter, and both force sides to compromise in the decades-long trade dispute.

The Minister also noted that both the Taoiseach Leo Varadkar and the Tánaiste Simon Coveney had raised the issue of tariffs on Irish goods during their meetings with president Trump and vice-president Mike Pence this year during their visits to Ireland.

Ms McEntee will later on Thursday deliver the key-note address at a conference in Georgetown University, titled: “Bridging the Atlantic: Ireland’s role in EU-US relations after Brexit.”