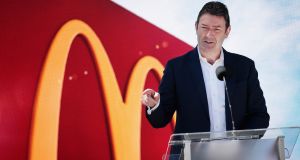 McDonald’s has filed a lawsuit against former chief executive Stephen Easterbrook to recover his exit package after an internal investigation showed that he had sexual relationships with multiple employees, violating company policy, the fast-food chain said in a filing on Monday.

Easterbrook “concealed evidence and lied about his wrongdoing” and had physical sexual relationships with three McDonald’s employees in the year before his termination, the filing said.

McDonald’s added that Easterbrook approved an “extraordinary” stock grant, worth hundreds of thousands of dollars, for one of those employees in the midst of their sexual relationship.

McDonald’s had dismissed Easterbrook in November over a non-physical, consensual relationship with an employee, which the board then determined violated company policy.

In November, the company said Easterbrook was eligible for six months of severance pay, which would have been $675,000 (€572,956), based on his 2018 base salary of $1.35 million. He was also eligible for prorated payment for hitting 2019 performance targets.

“Easterbrook’s silence and lies, a clear breach of the duty of candour, were calculated to induce the Company to separate him on terms much more favourable to him than those the Company would have offered and agreed to had it known the full truth of his behaviour,” McDonald’s said in the filing. - Reuters