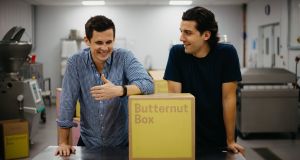 Although no financial details of the latest investment have been disclosed, industry sources estimate it to be worth about £20 million. This would bring total investment to date to £41 million.

The Series C funding round was led by the European arm of L Catterton, a $20 billion (€18.4 billion) private equity firm co-founded by luxury-goods maker LVMH Moët Hennessy Louis Vuitton, that has made more than 200 investments to date.

Mr Glynn, who was one of eight Irish people to have been included in last year’s Forbes prestigious “30 under 30” list of leading young innovators, entrepreneurs and leaders, founded Butternut Box with best friend David Nolan in 2016. The company has gone on to produce more than 20 million fresh meals for dogs across the UK, making it the largest manufacturer of fresh food for pets in Europe.

The former Goldman Sachs traders came up with the idea for the business when Mr Nolan’s sickly dog Rudie recovered after being fed home-cooked meals. The friends decided there was a gap in the market for a healthy dog food business. Feeding a 35kg Border collie with Butternut Box food could be expected to cost close to £4 per day.

Butternut’s success is partly a result of the technology platform it developed, which uses computer algorithms to work out the individual needs of each dog with dishes cooked made from fresh ingredients and portioned according to a pet’s breed, weight, sex and exercise routine.

The company is eying up new markets in Europe with a possible move into Ireland next year. “With L Catterton’s support, we will accelerate investments in supply chain, manufacturing, marketing and new offerings in order to expand our base of customers, who love feeding their dogs with personalised, nutritional and delicious meals and treats, said Mr Glynn.

Jean-Philippe Barade, partner at L Catterton Europe, said that what Butternut had achieved to date was impressive, but also just the start.

“We believe Butternut has a significant opportunity to expand further in a rapidly growing category and is well positioned to benefit from strong consumer trends among pet owners, including the increasing demand for high quality ingredients, healthier choices and personalised offerings,” he said.