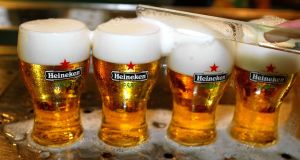 Europe’s largest beer seller said it had seen beer sales fall by up to 40 per cent or 50 per cent in bars and restaurants.

Heineken saw a gradual recovery in its business after global Covid-19 lockdowns in April, but uncertainty over the future impact of the pandemic left it unable to give a forecast for the rest of the year.

The world’s second-largest brewer said it took a more cautious view than sector leader Anheuser-Busch InBev, which said it had been encouraged by the global recovery in beer demand in June.

New Heineken chief executive Dolf van den Brink said business had improved to June, but this was partly due to restocking, particularly in territories such as Mexico, its largest market, where brewing was forced to halt in April and May.

“We are a bit concerned that people would see the . . . rate of June and extrapolate that going forward,” Mr Van den Brink, who took charge at the Dutch brewer on June 1st, told Reuters.

The company said Europe, Mexico and South Africa had led the sales decline, while its large Vietnam market fared better.

South Africa has reinstated an alcohol ban, while Mexico, the country with the world’s third-largest number of Covid-19 fatalities, had tighter lockdowns in some regions.

The maker of Europe’s top-selling lager Heineken, as well as Tiger and Strongbow cider, had issued preliminary first-half results in mid-July showing it sold 11.5 per cent less beer compared with the previous year and suffered a sharp drop in revenue as consumers opted for cheaper brews.

Heineken’s operating profit fell by about half and the brewer took €548 million of impairments, largely for its operations in Papua New Guinea and Jamaica, resulting in an overall net loss.

Europe’s largest beer seller said it had seen beer sales rise by double-digit percentages in stores, but fall by up to 40 per cent or 50 per cent in bars and restaurants.

Profitability of store sales was also lower as consumers bought multi-packs, and costs of producing canned and bottled drinks were higher than kegs, though Heineken said its premium brands had won share in most markets. – Reuters