Greencore halts production at Northampton plant due to Covid-19 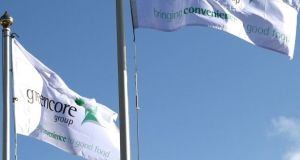 Shares in Irish-founded sandwich maker Greencore slumped on Friday after it announced it is to temporarily cease production at its plant in Northampton due to an ongoing Covid-19 outbreak.

In a statement, the London-listed company said it it to cease production at the facility at the end of today to allow staff to self-isolate as a precautionary measure.

Greencore said it has moved some production from the plant to other group sites and was working with customers to help mitigate any shortfall.

Shares fell more than 6 per cent at one point, before recovering to close 1.7 per cent lower at 123.90 pence.

The company last Thursday revealed that nearly 300 workers at the Northampton factory had tested positive for the SARS-CoV-2 virus.

Greencore said on Friday it is in contact with local authorities and was working closely with them to bring the site back into production as soon as possible.

Greencore is the largest manufacturer of pre-packed sandwiches in Britain and supplies most of the big retail multiples, including Marks & Spencer, Waitrose, Sainsbury’s and Tesco.

Unions representing workers at the facility said last week that staff were told they would be paid less than £100 (€111) a week if they had to self-isolate, making it difficult for many to comply.

Greencore estimated the site would be up and running again within 14 days and that the closure would have a “modest impact” on full-year adjusted earnings before interest, taxes, depreciation, and amortisation (ebtida).

Shares in the company were down over 8 per cent in London in early afternoon trading after news of the site closure became known.