Garlic growing a most bulbous business 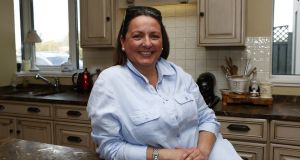 Marita Collier: not enough to ‘grow a bit of garlic and put in the boot of my car and sell it’

A trek through the Himalayas in 2011 gave Marita and Paul Collier the inspiration for a new business and way to make their family farm a viable enterprise.

“We stopped at a place called Ranikhet to stay overnight,” says Marita Collier. “We were out on the terrace up at 18,000 feet and I looked into an organic farm and saw they were growing scallions and onions. I got to speak to the gardener and he said it was garlic.

“We were fascinated, and he explained that the garlic needs cold, wet, damp and windy conditions, but also good soil. And I thought, it sounds exactly like our farm.”

The Colliers had been looking at ways of making their 100-acre farm in Baltray, Co Louth, viable, given the uncertain climate of farming. An uncle had left Paul Collier the farm, originally a mix of dairy, tillage and beef. The Colliers moved there in 2005 and rented out much of the land, but were finding it difficult to make it a viable enterprise.

“We were getting to the point that it was make or break,” says Marita Collier. “We had to turn this into a profit-making working business or we would have to sell, and we just literally kept trying to rack our brains.”

After that fateful trip to India, the Colliers decided garlic could be the solution. The next 18 months were spent researching, planning and sourcing seed that was certified disease-free.

They discovered that nobody was doing in this in Ireland. And that while there is “plenty of cheap rubbish garlic on the market”, there was a gap for a niche high-quality product.

Having a sales and marketing background, Marita Collier knew growing a good product wasn’t going to be enough. Much thought would have to go into how to sell it as well.

It wasn’t enough to “go into the field and grow a bit of garlic and put in the boot of my car and sell it,” she says. “You would never be able to make money at that.”

The Colliers realised that growing their particular business would not bring immediate profitability. They did the figures and knew that “from year one to year five, you won’t have any return at all”, Marita says. But their long- term goal is to “grow a very financially secure business on the farm”.

“I suppose like making whiskey, when you go into brewing it, you have to look at the bigger picture and say that is a five-year-old or a 10-year-old whiskey and it will be worth x amount.”

The Colliers have been blown away with the response to their garlic. They have to keep a lot of it back to sow again to increase the crop, which means they only have a limited amount to sell. Last year, they had a bumper crop and expected to have stock for six months, but it all sold out in eight weeks.

“I didn’t anticipate that,” says Marita Collier. “It’s very difficult when you are holding back what you could sell at very good prices. But in turn I would end up having to go and find seed again in Europe, import it and give it two years of growing before I was happy letting it go into the marketplace.”

The Collier’s garlic sells for about €2.50 per bulb, and their main buyer is Redmond’s Fine Foods, a gourmet food wholesalers that supplies high-end restaurants.

The chef at the Merrion Hotel, Ed Cooney, was so impressed with the garlic that he brought his team from the hotel kitchen to the farm just to sample the different varieties. They kept asking for more garlic, but the Colliers couldn’t keep up with the demand.

“I could have sold 100 times over what I grew,” she says, “and that’s why it blew me away and gave me the confidence to go: ‘This works, this is a success’.”

Growing garlic is extremely labour-intensive; everything has to be done by hand.

“You have to break every bulb by hand,” Marita says. “It’s called clove popping, and there are no machines for that. Then the cloves have to be planted one by one by hand. So at this moment in time, I have nearly 500,000 plants in the field. That was 500,000 cloves that were planted one by one.”

The physical labour side of the business was something the Colliers said they didn’t anticipate and were a bit naive about.

In the past few years there have been times, Marita Collier says, she has had doubts about the business and found it “very daunting”.

But seeing the response to it has made it worthwhile and she finds herself y excited each year to see “the results of the seeds and trialling out new ones – it’s not just a potato”.