ChiquitaFyffes will have annual revenues of $4.6bn and will be domiciled in Ireland 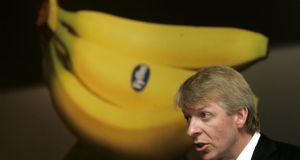 Shares in Irish fruit producer Fyffes rocketed on the Irish Stock Exchange today, after the company announced it will merge with US food group Chiquita, to create the world’s largest banana company.

Fyffes shares jumped more than 42 per cent in Dublin trading, while Chiquita shares climbed 14.6 per cent in New York.

The merged entity will be called ChiquitaFyffes and will be listed on the New York Stock Exchange but domiciled in Ireland. It will have combined annual revenues of approximately $4.6 billion (€3.3 billion).

ChiquitaFyffes will have an operating presence in more than 70 countries and a workforce of approximately 32,000 people around the world. It will also have a “significant presence” in the global market for packaged salads, melons and pineapples.

Ed Lonergan, chief executive officer of Chiquita, will serve as chairman and David McCann, current executive chairman of Fyffes, will become CEO of the combined company. The senior executives will be located in corporate offices in Charlotte, North Carolina and Dublin, Ireland.

Ed Lonergan, Chiquita’s CEO said that the deal was a “milestone transaction” which “brings together the best of both companies”.

“We will maintain our brands, all of which are valued by both customers and consumers. The combined company will also be able to provide customers with a more diverse product mix and choice. We know Fyffes well and our shared heritage will help to ensure a smooth integration as we work to bring best practices across geographies and business units to achieve substantial operating efficiencies,” he added.

David McCann, Fyffes’ executive chairman said that the deal will be “transformative and offer exciting opportunities for the new business”.

“We believe we will be able to use our joint expertise, complementary assets and geographic coverage to develop a business that can run smoothly and efficiently to better partner with our customers and suppliers.”

Chiquita and Fyffes plan to complete the transaction before the end of 2014.

Meanwhile, Fyffes also reported results for the year to December 31st 2013 this morning, reporting a 6.3 per cent hike in revenues to €1.1 billion. Excluding Fyffes’ share of its joint ventures, revenues grew to €836 million, an increase of 6.6 per cent.

The company said that the increase in turnover in the year was driven by “further organic growth in the group’s banana and melon categories, combined with price inflation in the banana and pineapple categories, reflecting higher input costs”.