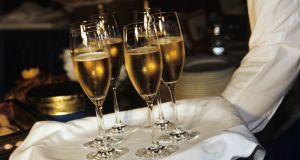 A weaker euro as well as booming demand for champagne and cognac helped the French drinks industry. Photograph: Getty Images

French wine and spirits exporters toasted a record value of overseas sales last year – thanks to a weaker euro, as well as booming demand for champagne and cognac.

Total exports reached €11.7 billion in 2015 – an 8.7 per cent increase in value terms on 2014 and an all-time high after two consecutive years of declines, according to industry’s FEVS export federation.

These latest figures have pushed wine and spirits into second place on the list of France’s most valuable export industries, above perfumes and cosmetics and behind aerospace.

Data released yesterday showed sales to China climbed 23 per cent last year to about €830 million – returning to a level last seen in 2013. In a statement, FEVS said a 19 per cent rise in volumes to China “seems to signal the end of the destocking” Chinese importers and distributors began in 2013.

That will come as relief to French producers such as Rémy Cointreau, Pernod Ricard and LVMH, which have suffered falls in high- end cognac sales in China. – Copyright The Financial Times Limited 2016