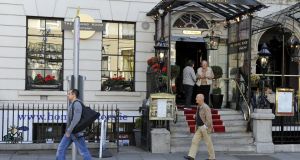 Louis Murray, former owner of La Stampa restaurant and night club, declared in the commercial court yesterday that AIB “betrayed” him by appointing a receiver to his business.

Mr Murray said that he and his adviser, former banker Bernard Somers, believed they and AIB agreed to sell the property to clear its €20 million debt to the lender just days before it appointed a receiver in October 2014.

The businessman broke down in the stand when he recalled hearing that AIB had appointed PwC’s Declan McDonald as receiver to La Stampa on October 23rd, 2014, while he was still recovering from cancer.

“I viewed it as something of a betrayal,” he said. Mr Murray and Mr Somers met bank official Shane O’Neill a week earlier and emerged believing the sides had agreed to a “consensual sale” of the property. “The word receivership was never mentioned,” he said.

AIB sold the Dawson Street, Dublin business to Tetrarch Capital in 2015 for €17.5 million. Mr Murray and his company, Bailieborough Spring Water, are suing the bank and Mr McDonald, saying they broke an agreement to suspend a sale while he recruited new investors.

His lawyers say the sale price left Mr Murray with a €3 million balance to repay and that it undervalued the business, which attracted bids of €20 million-plus.

Mr Murray agreed that relations with Mr McDonald soured. “I think the receiver acted in such a reprehensible and evil way against me from day one,” he said.

“And I did use the word reprehensible as I have never been confronted by such a thug in my life.”

Mr Murray argued that Mr McDonald damaged the business by halting work on extending Sam’s Bar, which could have boosted sales as the pub was attracting more customers than it could fit.

Mr Murray confirmed that he delivered proof that potential buyer Olympia Capital could fund a €21.5 million offer for the business to AIB by an agreed deadline of May 5th, 2015.

He recalled that Mr O’Neill congratulated him on keeping the hotel and said “everyone in AIB was rooting for you”, while another official, Maria Doody, “hugged and kissed him”. However, the bank advertised La Stampa for sale the next day.

He suggested that the buyer was able to pay less in May because the business was in receivership.