From Inner Mongolia to Iceland: Sense of optimism prevails at the three-day show 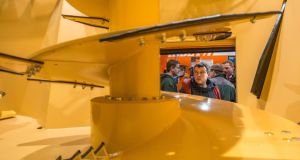 Ray Flemming from Wexford surveying a feeder made by Abbey Machinery during the FTMTA Show at Punchestown. Photograph: Brenda Fitzsimons/The Irish Times

The Rhino is a hulk of a machine. The 14-metre long piece of equipment washes, de-stones and chops sugar beet and it is one of the first things you see when you visit the farm machinery show at Punchestown racecourse.

When Ireland’s sugar beet industry was shut down in 2006 it should have been the death- knell for Cross Engineering, which manufactures these machines in Rathangan, Co Kildare. “I thought we were finished,” recalls Simon Cross. “We took a drop of €8 million in turnover.”

He started looking at the German market and one thing led to another. “Today we’ve got that turnover back to what it was, thank God. And it’s even better now because in 2006

Now he is exporting across the EU as well as to New Zealand and Canada. The beet prepared by the Rhino is used by anaerobic digesters to generate electricity. “One of our machines is making most of the electricity that powers Nottingham city,” he says with a hint of pride.

But the Rhino isn’t the most expensive item for sale at the three-day show which is organised by the Farm Tractor and Machinery Association (FTMA). Its chief executive says the priciest machine would probably be a Claas combine which retails at €330,000 plus VAT. And he highlights a Case tractor which packs more than 400 horsepower into its engine. One of its tyres would dwarf the tallest among us.

There is a definite sense of optimism at the machinery show. Milk quotas will be abolished at the end of March, leaving farmers free to produce as much milk as they want. “This means more cows. They’ll eat more so we’ll need more balers, silage harvesters, mowers, diet feeders. And of course there will be more slurry and we’re definitely selling more slurry spreaders,” Mr Ryan says. He points to a 3,500 gallon slurry tank at the show. “If you wanted a machine like that a few years ago you’d have to import it. Now Abbey Machinery is making it in Nenagh.”

She is looking forward to meeting the group of 30 foreign buyers brought to the show by Enterprise Ireland. “They have come from France, Germany, Holland, Canada and Scandinavia,” Mr Ryan says.

Sam Shine is casting his net further afield. Farmers in Inner Mongolia and northern Japan are using maize seeders made by his business, Samco. “The Japanese import 65 per cent of all food so obviously they want to grow more food, which is good news for us,” he says. “We have two Chinese people working with us in Adare, selling machines to Inner Mongolia. A huge market for us.”

1 Majority of employees don’t want to return to pre-Covid working patterns
2 Homeworking is depriving me of juicy gossip
3 Primark rejects £30m bonus for bringing back staff
4 If tourists are such pariahs should we not be testing them on arrival?
5 Tobacco giant’s menthol-ban substitutes take 5% share of Irish market
6 Investors in Irish solar energy fund in line for €20m payout
7 ‘My rent here is so low it’s a joke’
8 Norwegian airline sued in Dublin by inflight caterer
9 Varadkar and Donohoe to meet banks to discuss mortgage breaks
10 Government should set a benchmark for any permanent increases in spending
Real news has value SUBSCRIBE