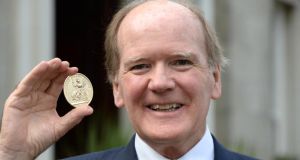 Alltech founder and president Dr Pearse Lyons, who was yesterday awarded the RDS Gold Medal for Industry and Commerce in recognition of his contribution to Irish business. Photograph: Cyril Byrne

Alltech founder and president Dr Pearse Lyons was yesterday awarded the RDS Gold Medal for Industry and Commerce in recognition of his contribution to Irish business.

Speaking at the event, Dr Lyons said he had always wanted such an award “ever since our great buddy Ronnie Delaney got a gold medal”.

He drew further laughter from the crowd telling them he had previously won another gold medal – for never missing a day at school.

Dr Lyons told the audience there were a number of key factors he stuck by when building his business. They included primacy in science, building on your knowledge, agility and ethics.

Ethical
Stressing the importance of being ethical, he said: “You need to be able to sleep at night. That ethos needs to run deep in the business.

“Dream big but you also have to dare to do something.”

A native of Co Louth, but based in the United States, Dr Lyons founded Alltech in 1980 with an initial investment of $10,000, and has seen the company grow to annual sales exceeding €500 million.

The business is currently one of the top 10 animal health and nutrition companies in the world, employing more than 2,600 people.

Alltech is hosting eight international events in Ireland this year, welcoming more than 3,000 additional overseas visitors as part of the Gathering.

On Thursday, it hosted the Alltech Global 500 event in the RDS, which drew more than 700 farmers from all over the world.

Speaking at the event, Dr Lyons said farmers must not become complacent regarding the future prospects of their businesses.

“Last year alone, 300 farmers in California went out of business due to cost pressures. This is a lesson that dairy and beef producers around the world must learn from.”

Irish industry
The awarding of the Gold Medal for Industry and Commerce is an integral part of the RDS Foundation’s Industry programme which aims to promote excellence in Irish Industry by encouraging enterprise, supporting innovation and recognising outstanding achievement in business and commerce.