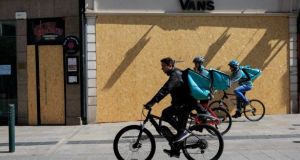 The Irish arm of online food delivery company Deliveroo recorded a 40 per cent rise in turnover last year as sales rose from €9.3 million to €13.8 million.

However, the company, which has recently expanded from delivering takeaways to groceries via of a deal with discounter grocer Aldi, swung to a €365,603 pretax loss from a €259,387 profit in 2018 on the base of a sharp increase in cost of sales to €10.9 million.

Accounts recently lodged with the Companies Registration Office show Deliveroo Ireland had net assets of €2.7 million at the end of 2019, as against €2.9 million a year earlier.

The company recorded staff-related costs, including wages and salaries, of just over €1 million last year. Deliveroo employs 20 people in Dublin with its fleet of riders deemed to be self-employed individual contractors, rather than employees with rights such as annual leave and sick pay.

Deliveroo was founded by Will Shu in 2013 in London and operates in over 500 towns and cities across 12 markets. It launched locally in 2015, and currently works with more than 1,000 riders and over 1,800 restaurants across Dublin, Cork, Limerick and Galway.

The company, whose parent recorded a 72 per cent rise last year to £476 million, has seen a huge jump in demand during the Covid crisis with the number of Irish restaurants on its platform having increased by half in the first six months of this year.

Even before the pandemic, Deliveroo was aiming to increase the number of restaurants on its platform to 2,000 this year. Its plans to expand into suburban Dublin will mean it reaches an additional 100,000 consumers in 2020, adding to the 1.4 million it now services.

In addition to delivering takeaways, Deliveroo has also expanded into groceries though a partnership with Aldi, which was recently expanded to reach an estimated 1.5 million shoppers in the Republic.

A spokesman for the company said expansion into the retail sector “ continues to add value to the Irish business, with increased order volumes of 40 per cent in 2020 thus far.”

“With more riders and restaurants joining the platform and with more choice for consumers, for example from some of Ireland’s best loved supermarkets, we are seeing more people use our service. Deliveroo has invested in Ireland and we are pleased to see the growth we have this year,” he added.