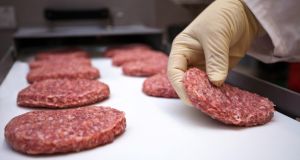 A meat processing plant in Co Waterford that produces approximately 400 million burgers a year for McDonalds, has today resumed production.

With the fast food giant starting to open up restaurants again across Europe, workers at the Dawn Meats processing facility at Carrolls Cross, have recommenced patty production after a two-month gap.

Production at the facility stopped on March 18th as McDonalds closed outlets due to the coronavirus pandemic. Dawn redeployed its 50 employees during the shutdown to other parts of the business.

As of Monday the staff are back producing patties, albeit with enhanced protocols to ensure social distancing.

The company is believed to have produced over two billion burgers for McDonalds outlets in Europe since the dedicated facility opened in June 2012 as part of a €300 million deal.

“The reopening of Carrolls Cross is great news for staff and our supplier farmers, and an important confidence boost for all who have been affected by the closure of restaurants and the loss of the associated production,” said chief executive Niall Browne.

Dawn Meats, which was established in 1980, employs more than 7,000 staff in 12 countries and it has annual revenues of over € 2 billion.

In common with other major meat processing groups, it has struggled with the impact of Covid-19 on its own staff. The company closed its Kilbeggan plant in Co Westmeath at the start of the month after four confirmed cases of coronavirus among staff at the site.

McDonalds reopened six drive-thru restaurants in Dublin last week with the rest of its drive-thru network here expected to be back in action early next month.

1 Belgium helps Ireland to a Brexit boon
2 If international visitors are pariahs why are we not testing them on arrival here?
3 Varadkar to meet banks in row over interest on mortgage payment breaks
4 Can Grafton Street stop the flood of closures?
5 ‘My rent here is so low it’s a joke’
6 Goodbody loses a second suitor as Bank of China deal falls through
7 Irish tech firm to facilitate cashless tickets for hurling and football
8 Goodbody’s planned €155m sale to Bank of China falls through
9 Legal tech start-up aims to make DIY divorces easier and cheaper
10 This charming man: how Paschal Donohoe won the Eurogroup presidency
Real news has value SUBSCRIBE