Coveney ‘hopeful’ of agreement on CAP 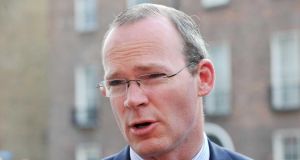 Minister for Agriculture Simon Coveney has said he is hopeful that final agreement on CAP will be reached this week. Photograph: Laura Hutton/Photocall Ireland

Minister for Agriculture Simon Coveney has said he is “hopeful” that final agreement on a new Common Agricultural Policy package will be reached this week.

Speaking in Luxembourg this morning on his way into a key meeting of EU agriculture ministers, the Minister said that, while all sides had “red line issues” that were important to them, compromise was needed .

“People need to understand that to get an agreement there needs to be compromise,” Mr Coveney said. “European farmers expect a result this week and we’re going to try and do everything we can to deliver that for them. “

Discussions on reforming the Common Agricultural Policy have been ongoing for three years, but it has fallen to the Irish presidency of the Council of the European Union - which now enters its final week - to secure final agreement.

The new package needs to be signed off by three EU institutions - the European Commission, the European Parliament, and the Council of agriculture ministers which represents all 27 EU member states.

Mr Coveney said this morning that around 25 issues still remained. “As always in a political negotiation the most difficult issues don’t get resolved until the end, “ he said, pointing out that most of the other issues have been resolved.

Final agreement is unlikely to be reached until Wednesday at the earliest.

Among the most contentious issue for Irish farmers is the reform of the Single Farm Payment, the system of direct supports that are paid to farmers throughout Europe by the European Union.

While the overall EU expenditure on the single farm payment is being reduced and rebalanced, the Commission has also proposed a radical change to the way in which the payment is distributed within member states.

Instead of the current system where payment is based on past production, the Commission is proposing that the payments should be calculated on a per hectare basis, though many farming groups, including the IFA, argue that this will reward inactive farmers. The issue of a minimum payment for farmers is likely to dominate discussions today and tomorrow.

The Council Despite the Commission’s proposal that a minimum payment for all farmers should be introduced, the position adopted by member states in March removed the mandatory minimum payment.

However, some compromise on the issue was inevitable, the Minister for Agriculture said this morning. “I’ve always said to Irish farmers that in an effort to get a final agreement there would need to be some compromise in relation to a minimum payment,” he said. “Obviously I have been working for a lower limit in terms of a minimum payment, because I think that’s the right thing to do for Irish farming, but also for other countries , for Spain, Italy, Portugal Denmark and others.”

Speaking ahead of this week’s meetings, IFA president John Bryan said a mandatory minimum payment would be “hugely damaging for Irish agriculture.”

As well as changes to the Single Farm Payment, the other major reform to the Common Agricultural Policy is the introduction of new ‘greening’ measures, which aim to improve the environmental sustainability of farming.

Under the proposal, 30 per cent of the single farm payment will be linked to greening, while other funding schemes, such as the various agri-environment schemes, will also have a ‘greening’ component. However, the greening element of the CAP proposal is not expected to have a major impact in Ireland, where over-farming is not an issue.

Agreement is also expected to be reached on the re-introduction of sugar quotas. While the European Commission had proposed scrapping sugar production quotas and minimum sugar beet prices in 2015, the European Parliament voted for sugar quotas to be retained until 2020. The proposal reached by member states in March settled on a date of 2017.

A number of Irish farming representative groups including the IFA and the Irish Cattle and Sheep farmers association are in Luxembourg for the talks.

The European Commission will be represented by Commissioner for Agriculture and Rural Development Dacian Ciolos, while a delegation of MEPs, headed by EP Agriculture Committee Chairman Paolo De Castro, will also be present.