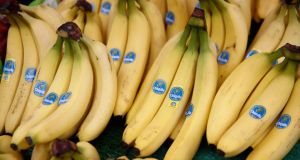 Brazilian consortium Cutrale-Safra has won the battle to acquire Chiquita Brands International, announcing today it had entered a definitive merger agreement with the US banana producer.

The Brazilian bidders will pay $14.50 for each share of Chiquita, the companies said in a joint statement, valuing the company at about $682 million.

Talks about the deal began after Chiquita shareholders last week voted to reject their company’s proposed takeover of Dublin-headquartered Fyffes. Chiquita will now have to pay Fyffes a multi-million dollar termination.

Fyffes said that under the terms of its proposed merger, it “is entitled to a termination fee of 3.5 per cent of the total (market value) of Chiquita . . . should (it) enter into a separate transaction agreement within nine months”.

The break fee would be calculated on the value of Chiquita the day before it formally accepts any offer made by a rival bidder, such as Cutrale-Safra.

Chiquita chief executive officer Ed Lonergan said the board was pleased with the value and significant all-cash premium that has been delivered through the agreement with Cutrale-Safra.

“Through the due diligence process, we developed a tremendous amount of respect for the entire Cutrale-Safra team, especially their knowledge and understanding of global agribusiness, shipping and manufacturing,” he added.

Cutrale-Safra said it was pleased to make a long-term investment in Chiquita.

“It has impressive brand loyalty and recognition through its Chiquita and Fresh Express brands, providing the company with a strong competitive edge in the growing worldwide demand for high-quality fresh fruits and salads,” both companies said in a joint statement.

Under terms of the deal, shareholders of Chiquita will be paid $14.50 for each of their shares in cash. Cutrale-Safra will assume Chiquita’s debt, with Safra-controlled bank J. Safra Sarasin extending a buyback of the banana producer’s senior bonds due in 2021. The value of the deal, including debt, amounts to $1.3 billion.

The $14.50 per share consideration to be received by Chiquita shareholders represents a 33.8 per cent premium to Chiquita’s closing price on March 7, the last trading day prior to the announcement of Chiquita’s transaction with Fyffes.

The Chiquita-Fyffes combination would have created the world’s largest banana company. It also would have allowed Chiquita to relocate its headquarters to Ireland, which has a lower corporate tax rate.