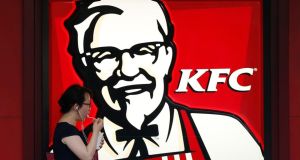 A customer walks past a KFC store in Shanghai yesterday. REUTERS/Aly Song

The latest food scandal in China is spreading fast, dragging in US coffee chain Starbucks, Burger King Worldwide Inc and others, as well as McDonald’s products in Japan.

Yesterday, Starbucks said some of its cafes previously sold products containing chicken sourced from Shanghai Husi, a firm that was shut down by local regulators after a TV report showed staff using expired meat and picking up meat from the floor to add to the mix.

A Tokyo-based spokesman at McDonald’s Holdings Co (Japan) Ltd said the company had sourced about a fifth of its Chicken McNuggets from Shanghai Husi and had halted sales of the product on Monday.

Alternative supplies of chicken have been found in Thailand and China, he added. The company’s shares briefly fell as much as 1.4 per cent to a 15-month low before closing down 0.4 per cent.

China’s food watchdog said it ordered regional offices to carry out spot checks on all firms which had used Shanghai Husi products, and would inspect all of parent OSI’s sites in China to see if enough has been done to ensure food safety. It said the case could be handed over to the police.

Fast-food chain Burger King and Dicos, China’s third-ranked fast food chain owned by Ting Hsin International, said they would remove Shanghai Husi food products from their outlets. Pizza chain Papa John’s International Inc said on its Weibo blog that it had taken down all meat products supplied by Shanghai Husi and cut ties with the supplier.

Food safety is one of the top issues for Chinese consumers after a scandal in 2008 where dairy products tainted with the industrial chemical melamine led to the deaths of six infants and made many thousands sick.

Other food scandals have hit the meat and dairy industries in recent years, and many Chinese look to foreign brands as offering higher safety standards.