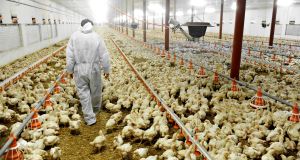 A Cavan chicken farmer is suing the Revenue Commissioners for damages.

A Cavan chicken farmer who alleges that his refusal to engage in VAT practices he believed were unlawful meant he was put out of business, is suing the Revenue Commissioners for damages.

Alo Mohan, of Redhills, Co Cavan, says his family business once had a turnover of approximately €2 million a year. He claims he made the Revenue aware of practices that were costing the State “a massive loss of tax income” but that the VAT practices were allowed continue.

“The result has been enormous loss, damage, irreversible character damage, and expense to our client,” Mr Mohan’s solicitors, KRW Law, said in a letter of claim sent to the Revenue.

Mr Mohan lodged proceedings in the High Court last week alleging misfeasance. The action is against the Revenue Commissioners, Ireland and the Attorney General.

In his letter of claim, Mr Mohan said that he agreed over a period of years to “comply with instructions” from a food processor in relation to de-registering for VAT, operating under the flat rate VAT system, and paying a higher than market rate for feed while being paid a commensurate higher price for chickens.

It was made clear to him, he said, that failure would “result in an uncertain future”.

Flat-rate payments are payments made to farmers who are not registered for VAT, to compensate them for VAT paid by them for goods and services connected to their business.

Mr Mohan said he implemented the requested measures for a number of years but that, when the processor asked that he become involved with another group, Mr Mohan declined, having been advised, he said, that the scheme involving the group would be unlawful.

When he sought to work with a different supplier, the food processor intervened. He was prevented from working with a new supplier and he was “put out of business”, according to Mr Mohan’s letter of claim.

Mr Mohan, who is a former chairman of the national poultry committee of the Irish Farmers’ Association, spoke out about his concerns some years ago.

The matter was raised at EU level in 2016 and the then minister for finance, Michael Noonan, said “VAT avoidance schemes were being developed and probably in place, particularly in the poultry sector” during an appearance at the Economic and Monetary Affairs Committee in the European Parliament.

He said he had introduced changes in a Finance Bill specifically to tackle “tax evasion in the poultry industry that gave competitive advantage to those who used it rather than those who didn’t”.

Soon afterwards the matter was mentioned in the Seanad by Senator Rónán Mullen.

“If the man in question and his farm family in Co Cavan have done nothing wrong, why do they not have an outlet for their produce? Are they being blackballed by their previous processor?”

The measure introduced by Mr Noonan in 2016 allowed for certain agricultural sectors to be excluded from the flat-rate addition scheme. It has not yet been applied to any sector.

“Section 86A of the VAT Consolidation Act 2010, introduced by Finance Act 2016, provides for the exclusion from the flat-rate addition scheme by ministerial order of any particular agricultural sector where there is a systematic excess of the amount of flat-rate addition payments over the amount of non-recoverable tax on input costs borne by flat-rate farmers within that sector,” a spokesman for the Department of Finance told The Irish Times. “To date the Minister has not made any order under this provision.”

A spokeswoman for the Revenue Commissioners said the legislative amendments introduced in 2016 enabled Revenue to undertake a detailed examination on the operation of the flat-rate addition scheme in the poultry sector.

“The Revenue’s report is currently under consideration by the Department of Finance,” she said.

In the Dáil last year, deputy Peadar Tóibín asked the Minister for Finance, Pascal Donohoe, for his view on Mr Noonan’s assessment that there was “tax evasion” in the poultry sector and whether this gave a competitive advantage to those who used it as against those who did not.

Mr Donohoe, in response, said business models and contractual arrangements in the poultry sector created the conditions for the generation of a systematic excess of flat-rate addition payments to farmers in the sector over their VAT input costs.

At the time, this business model did not breach Irish VAT law and “did not constitute fraud or tax evasion”.

A detailed examination of the operation of the flat-rate scheme in the poultry sector had been completed by the Revenue and was with his department, he said. The review was “under consideration”.

The Revenue spokesman said he was precluded from discussing the tax affairs of any individual, company or entity.