Company has grown steadily through acquisitions and organically 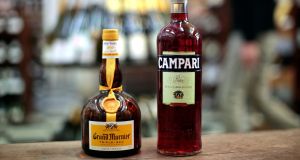 Italy’s Gruppo Campari has agreed to buy the Grand Marnier group in a deal that gives the French distiller an equity value of € 684 million.

Gruppo Campari said on Tuesday it had reached an agreement with the controlling family shareholders of Société des Produits Marnier Lapostolle, offering them € 8.05 per share in cash - a 60.4 per cent premium compared to Friday’s closing price.

The acquisition will add to Campari’s expanding portfolio of well-known brands as classic cocktails continue to enjoy a renaissance.

Campari has grown steadily over the past few years, both organically and through acquisitions, to become the world’s 11th largest spirits-maker in 2014, with brands such as SKYY vodka, Wild Turkey, Aperol and Cinzano.

But that gives it only a 1 per cent share of the market compared with 21 per cent for the industry’s two dominant distillers – the UK’s Diageo and Pernod Ricard of France.

SPML, which was founded in 1827 by Jean-Baptiste Lapostolle, produces cognac and Armagnacs. Its flagship Grand Marnier, a blend of cognacs and essence of orange, is used in a wide range of drinks as well as being the star ingredient of the classic crêpe suzette.

The company has annual revenues of about € 152 million, more than half of which come from the US.

Bob Kunze-Concewitz, Campari’s chief executive officer, said that the acquisition was “a perfect fit with our external growth strategy”. He added: “Grand Marnier strengthens our quest to further capitalise on the revival of classic cocktails, particularly in the US.”

Under Mr Kunze-Concewitz, Austrian-born and raised in Turkey, where his grandfather was a distributor of Cinzano, the company has developed a reputation as an acquisition machine for small spirits brands.

Since becoming chief executive in 2007, two years after joining the company from Procter & Gamble, Campari has spent about € 1.5 billion in acquisitions and about € 200 million on its supply chain, building new factories and revamping others.