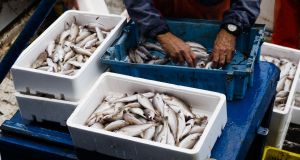 Bio-Marine Ingredients Ireland extracts proteins, oils and calcium from fish for use in food ingredients and as animal feed

An Irish company that extracts proteins, oils and calcium from fish for use in food ingredients and as animal feed has raised €5 million from small investors.

The new financing by Monaghan-based Bio-Marine Ingredients Ireland was secured through an employment and investment incentive scheme (EIIS), a State-backed initiative that allows small investors to claim relief on investments in early-stage companies. It brings funding by the company to date to €30 million.

It has a €12 million marine ingredients processing facility in Castleblayney that employs 25 people and has a capacity for 12,500 tonnes of fish. Currently it is operating at about 50 per cent capacity. The new funding will be used as working capital to boost this and to take on an additional 10 employees.

Bio-Marine Ingredients Ireland has also previously secured planning permission for a second plant in Killybegs that will cost an estimated € 35 million to build, and which will have the capacity for 120,000 tonnes of fish once up and running.

The company, which promotes its products as being “the whey of the sea”, is seeking to tap into the global protein ingredients sector which is forecast to be worth close to $40 billion by 2024.

It has the only facility of its kind in Europe with fish, such as blue whiting, sourced from the west of Ireland.

Mr Whooley told The Irish Times that the fact it has complete control of the supply chain is an important factor for customers.

“About 70 per cent of the planet is under water but currently we’re only getting 2 per cent of our food from it so there is a great opportunity for us,” Mr Whooley told The Irish Times.

“There has been a need to educate the market on what we do, and it has taken us awhile to make inroads. But being able to tell customers that we can continue to supply and won’t disappear overnight has been critical to our success,” he added.

Bio-Marine Ingredients Ireland incurred a €717,962 loss in 2018, the last year for which company accounts are publicly available This brought total accumulated losses to €6.2 million.