Back on its feet, hamper firm targets international customers 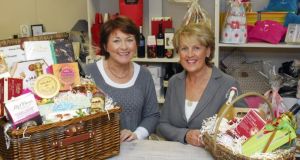 Seeking a better work-life balance, Cork woman Mary Leahy quit her job in Bank of Ireland in 1991 to go into business with her friend Oonagh Levis.

“People thought we were mad. There was no such thing as local enterprise boards, grants, mentors or even mobile phones back then. It was a very different climate where shoe leather, self-belief and sheer determination were the tools of the trade,” Leahy says.

The inspiration for the business came from an advert Leahy saw in The Irish Times for door-to-door delivery of teddies. “It got me thinking that we could do the same thing.

“From there,” she adds, “the idea developed very quickly to doing a small selection of hampers in 1991 to a huge range of hampers now and gifts for any occasion. Once we had made the decision to go for it, we went in all guns blazing.”

The duo started their business by making small luxury hampers in Leahy’s kitchen and selling them door-to door.

In the first year, they made a very simple brochure and even took all the product photographs themselves.

“We set up in Mary’s house in 1991 and were determined to keep cost down by doing everything ourselves, including the photos for the brochure,” Levis says.

“We lit the fire and scattered straw on the floor around the hampers to give the photos a Christmassy feel. Unfortunately, that wasn’t a good mix and we didn’t even notice the chimney was on fire until Mary’s neighbour ran in yelling that flames were leaping out of the chimney.”

The business remained small for the first few years, with much of the orders coming from repeat customers and local businesses. Slowly, however, it grew through word of mouth and orders started coming in from around the country and overseas, with the United States and Britain remaining the two biggest export markets for the hampers.

“Christmas 2007 was a bumper time for us,” Leahy says. “We had a hugely successful year which led us to move to new, bigger premises in July 2008. We installed state-of- the-art racking and new systems in the warehouse. Then, in September 2008, order numbers collapsed.”

Hamper revenues fell by 40 per cent in 2008 and sales stayed low for the next three years. There was only marginal improvement from 2010 until 2013, she adds, when former customers slowly started to return and place orders.

“It was a very difficult time for us, especially dealing with the banks. They didn’t have an understanding of our circumstances despite having dealt with us for so many years. They didn’t understand how hard it was to keep a business like this sustainable.

“We had to cut back on everything that year – we even had to call up the basket suppliers in China to cut down on the order we had already placed for the next year.”

In September 2009, worried that the luxury hamper market was about to collapse entirely, the pair set out to future proof their business by setting up a sister company called Gift Guru (giftguru.ie).

“The main reason for setting up Gift Guru was to offer a more diverse range of gifts at a reasonable price. It caters to a totally different market, mainly individuals aged between 18 and 35, whereas the hampers are aimed at a more corporate market.

“It has also been a great help to our hamper business we now have a much greater selection of gifts to include in the hampers. It’s a great asset to have as there’s nobody we can’t cater for,” says Leahy.

The duo are currently trying to develop their website as they want to continue to target more international customers.

They are also aiming to improve the contents of their hampers each year while keeping them at a competitive price.

To do this, they spend a lot of time at local farmers markets looking for new suppliers. “There is no shortage of good suppliers, the only real difficulty is in finding suppliers that can meet the volume of orders we place for our hampers.”

During November and December, Leahy says the warehouse resembles an American department store on Black Friday. “This time of the year is a complete juggling act, needing to order food in time to pack the hampers for shipping whilst ensuring that it has the longest shelf life possible.”

She says there can be a lot of drama associated with tight deadlines.

“One year a supplier’s premises was completely destroyed by flood waters, but he acquired another premises and worked day and night to get his product to us. Another year we got a call from the shipping agent to say he had good and bad news, our wine had arrived into port but the bad news was they had left it on the ship and it had sailed back out to sea.”

The company is seeing a huge uplift in hamper orders this Christmas, with a huge demand for their breakfast hampers from the United States.

“We’re doing a lot of business in the US this year. Breakfast hampers are the most popular there as they contain Irish foodstuffs such as Irish butter and Barry’s tea. They are now even more popular than the sweet hampers, which contain Cadbury’s and Tayto crisps.”