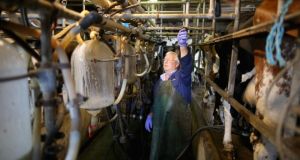 German retailer Aldi and British chain Morrisons have agreed to increase the price they pay to British suppliers for milk, bowing to pressure from dairy farmers.

Aldi, the discount supermarket, said it would pay a minimum of 28p per litre for liquid milk from Monday, following talks with farmers and unions, while Morrisons will pay 26p per litre

The increase was announced after Asda said on Thursday it would also pay 28p per litre. This means that Aldi, Morrisons and Asda have all committed to pay more than the current average price paid to farmers of 23.66p per litre.

Britain’s National Farmers Union has warned that dairy producers are facing a “state of emergency” because the price they are paid for milk has fallen by a quarter over the past year. This has taken the price of milk below the estimated 30p per litre cost of production, with the NFU claiming many farms sit on the brink of financial ruin.

The campaign group Farmers For Action organised protests against Asda, Morrisons, Aldi and Lidl after the supermarkets refused to follow Tesco and Sainsbury’s in linking the price they pay for liquid milk to production costs. The chairman of Farmers for Action has described the row as a “morality issue”.

In a statement on Friday Morrisons said: “We are going to increase our offer to our processors for the liquid milk element of our processed fresh milk to a minimum price of 26 pence a litre from later this month and through the winter.”

The move comes amid similar outcry in the Irish dairy sector over the collapse in global dairy prices.

At last week’s Global Dairy Trade auction, which sets the main reference price for products internationally, dairy prices crashed to a 12-year low having more than halved over the past year.

Constraints on demand from larger dairy buyers linked to a slowdown in China and an import ban in Russia were pinpointed as the main causes.

The latest official figures here put the average price per litre paid to farmers at 28 cent, down from 34 cents in January and a high of 43 cents last year.

With the cost of production in Ireland put at 25 cent a litre even before labour costs, many Irish farmers are now losing money on the milk they sell.

The crisis has prompted calls for a rise in the EU intervention price for milk but EU agricultural commissioner Phil Hogan has so far resisted such a move.

About €1 billion will be drained from the Irish economy this year as a result of falling milk prices, the Irish Creamery Milk Suppliers Association (ICMSA) estimates.

The group said farmers were facing income swings of up to €40,000 as a result of the current market slump and that many would be run out of business if the European Commission failed to take decisive action to support prices.