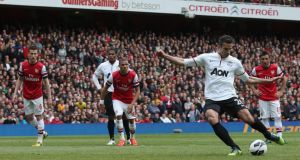 Irish pay TV broadcaster Setanta Sports is in advanced discussions with BT to offer the UK telco’s new sports channels as part of a bundled offering in Ireland.

This is a potentially transformation deal for the Dublin-based company, owned by entrepreneur Mickey O’Rourke, as it will give Setanta access to BT’s 38 live English Premier League matches and a portfolio of other top sport coverage.

Details of the agreement are expected to be formally announced on Monday, with former England striker Michael Owen and former English rugby international Austin Healey, both BT commentators, travelling to Dublin for the launch.

Setanta is expected to offer a bundle of five channels – Setanta Ireland, Premier Sports (a UK channel operated by O’Rourke), BT Sports 1 and 2 and the ESPN channel. This will give Setanta the potential to go head- to-head with Sky Sports for subscribers on the various pay TV platforms available here – satellite, UPC and Eircom.

It remains to be seen how much Setanta will charge for this bundle. It currently costs up to €17 a month to subscribe to its existing channels – Setanta Ireland and Setanta Sports 1.

Setanta recently retained the rights to show 33 live English Premier League games on Saturdays in the Republic for another three seasons. With BT’s rights, it will now be able to offer 71 live Premier League matches each season to subscribers.

BT has launched the biggest challenge yet to Sky’s 20-year dominance of live English Premier League soccer by paying £738 million to secure live rights for three years, starting from August. This includes 18 of the “top pick” matches, which for the first time will not all be with Sky Sports.

BT is offering its sports channels for free to its broadband customers and claims that customers who take Sky’s broadband and sports offerings could save about £100 a year by switching. Its focus is squarely on the UK market, which is why it has teamed up with Setanta in Ireland to offer its rights here.

BT Sport will also offer live soccer from Germany, Italy and France, the FA Cup in England, the Scottish Premier League, and the UEFA Europa League.

Setanta was the first meaningful challenger to Sky in the UK when it won the right to show 46 English Premier League matches for three years from the 2007-08 season.

It added other expensive rights to the mix but the UK business collapsed in 2009 under the weight of its debts.

The Irish business was rescued by Mr O’Rourke and his long-time business partners, Leonard Ryan and Mark O’Meara, and entertainment promoter Denis Desmond. Mr O’Rourke has since taken sole ownership of the business.