Keeping ahead of the curve in the beauty business 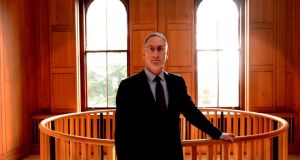 It’s hard not to feel just a little bit self-conscious when presented at close quarters with the global chief executive of a huge cosmetics company. There’s a man who rubs shoulders with Halle Berry at the Oscars and here is The Irish Times , whose make-up regime might be most kindly described as a regrettable afterthought. Fortunately, Alan Ennis, the Irishman at the head of Revlon, keeps his judgments to himself.

He does confess, however, to once crossing the line with former government minister Mary Hanafin by advising her that brown/black mascara would be a better fit with her fair complexion that the black she was wearing at the time. He says they became friends afterwards.

Ennis, a Dubliner who went native in New York more than a decade ago, has lots of impressive and glamorous acquaintances these days, but seems to do a fairly good job of keeping things grounded. He is extremely confident in his own abilities, but treads on the right side of brashness, managing a degree of self-deprecation while describing how he found himself at the top of the corporate tree.

Now 43, he is an old hand at the cosmetics business. He knows that it’s bad to say “they’re all pink” about lipsticks and realises that last year was all about nail varnish, while this year, we’re probably more excited about lip colours.

He also knows though that he does not need to be on top of every detail of the industry some say is worth up to $20 billion annually as long as he has the right people around him. He is, at his core, a numbers man, his path to the helm of Revlon having been eased by his ability to permanently strip $55 million out of the company’s cost base while making his lightning-speed progression through the company’s ranks.

As a UCD-trained accountant, Ennis must surely qualify for some kind of “most exciting career” award but, for now, he is settling for the 2013 UCD Michael Smurfit Graduate Business School Alumni Award, which he will receive tonight. He says he is “deeply humbled” by the honour and pays tribute to the faculty who taught him, though he is less enthusiastic about the course he chose.

“I hated accountancy in UCD,” he says with the bluntness of a man who will never again be seeking a job as an accountant in Ireland. He confessed his misgivings at the time to his banker father, who informed him that he did really want to be an accountant but that he just didn’t know it yet. On reflection, he acknowledges the profession has served him well but says he does not miss “the days of debits and credits”.

Ennis trained with Arthur Andersen in Dublin, where he excelled, but he declined to be embedded: “I was good at it but I didn’t like it.

“I decided I didn’t want to be a partner in an accountancy firm,” he says. “I felt I wanted to be accountable for a business and accountable for the results of that business, as opposed to being an adviser on the outside.”

Particularly, he disliked auditing and intensively advising a business over a short period, only to “walk away” a few weeks later and never know what happened.


Silver lining
The breakthrough that allowed him to avoid this fate and ultimately pursue his entrepreneurial spirit came as he was headhunted to become head of European internal audit at Ingersoll-Rand, a $10 billion industrial heavyweight that sells everything from air conditioners to deadbolts.

Ennis was just 27 at the time and was not overly impressed by his new Manchester base, which he diplomatically describes as being “a lot different from London”.

The silver lining was that it was where he met his now wife, Michelle, an American who was similarly exiled at the Manchester business. Before long, he had followed her to the US, first continuing to work in internal audit with Ingersoll-Rand before joining Revlon in 2005 after he ran out of road at the industrial.

He says he was ready for a new job at and sat down with the CFO at Ingersoll-Rand to talk about what might be open.

“They had three wonderful opportunities, all of which would have been the CFO of a significant part of their business. The issue was that all three of those businesses were in places that I didn’t want to live.”

The places in question were: Campbellsville in Kentucky, Shippensburg in Pennsylvania and, perhaps most strikingly, Fargo in North Dakota.

He went home to his wife, a finance professional with fashion brand Liz Clairborne at the time, who remarked: “Honey, the catwalk’s pretty short in Fargo.”

Luck and redemption arrived when a friend and co-worker got a call about the Revlon job and passed on the opportunity to Ennis. The move was not necessarily a natural one, with the bridge from an industrial to a cosmetics brand requiring some imagination on both sides.

Ennis laughs now at the switch from ball bearings and jackhammers to Halle Berry and Cindy Crawford but, for him, at the time the more significant shift was the move from a stable giant of a company with $10 billion in sales to a $1.3 billion cosmetics business that had “a very chequered financial past” and a lorry-load of debt.

“But that was a step up in my career and I took it. And I didn’t have to go to Fargo.”

Ennis isn’t exactly a risk-taker but he does like to take what he describes as “educated chances” and this was most definitely one of these. His career as a whole has been about “a combination of skills and timing”, he says, along with “thoughtful, disciplined decision-making”.

In other words, if you’re interested in career progression but see that your “upper mobility potential” is blocked by other people likely to be promoted before you, it might be time to look at another employer.

Ambitious as he clearly was, Ennis says now that he had no idea (“not in my wildest dreams”) that he could or would become chief executive of Revlon within just four years of joining the company.

“I felt, at one level, I had a shot at it,” he says of becoming a chief executive, adding that he presumed that any such opportunity would have come much further down the track.

As it turned out, a “a sequence of events” intervened, with a failed 2006 product launch leading to the somewhat dramatic departure of Revlon’s three top executives: the chief executive, the chief financial officer and the head of marketing. At 36, Ennis found himself elevated to the CFO role after a short stint as head of internal audit. But he didn’t finish there.

In 2008, the then chief executive, who was in his 60s, began to talk about succession planning, putting Ennis in the frame. He took on the role in 2009.

“I certainly didn’t expect it to happen that quickly,” he says, admitting that he “knew nothing about make-up” when he joined the company.

This doesn’t mean Ennis hasn’t since bought into the whole cosmetics business, choosing to test products himself, including lipsticks. He has been known to find himself absent-mindedly reading Glamour magazine on the train (to check on Revlon advertisements) while sporting nail varnish applied earlier that day to verify its durability claims.

He talks naturally about discovering the “holy grail” of the cosmetics world: a mascara that lengthens, volumises and curls “all at the stroke of a wand”, or a lipstick that stays put and moisturises all the while.

Revlon’s sales last year topped $1.4 billion,with the company achieving an operating margin of 15 per cent, but Ennis and his peers know how fickle their mostly female consumers can be.


Advertising strategy
These days, it is all about “finding a way to intercept her with a message when she’s most likely to want to receive that message”. This could see a text beeping on a woman’s phone as she enters the drugstore, offering her a Revlon discount voucher as she passes the brand’s offerings. Similarly, Facebook “likes” need to be translated into “talking about” numbers and bloggers need to be closely courted.

Revlon is 80-per-cent owned by Ronald Perelman, a self-made billionaire who Ennis unsurprisingly describes as “a tremendous businessman”. Perelman is actively involved in the company, particularly in its advertising strategy, and likes to meet Ennis at least twice per week.

“You go into a job like this with your eyes wide open and you recognise that in the public eye, you’re accountable.”

“Over the course of 20 or so years [during which Perelman has owned between 60 and 80 per cent of the company], there has been a fair amount of senior management turnover,” Ennis admits.

Outside the day job, he sits on the board of the Ireland-US Council, an organisation of heavy-hitting business people who focus on “oiling the wheels of commerce” between the two countries.

He says he has never encountered any ill-feeling or prejudice against Irish people, but admits that he didn’t really integrate with the Irish community in the US during his first years of work in the country.

It is only in recent years that he has started to feel he could be “potentially influential” in a good way and has started to become more active as an old boy of Dublin’s Blackrock College, where he boarded as his parents worked abroad, and UCD.

He advises today’s UCD graduates to consider “disciplined risk-taking”, where they can identify their optimal job but may need to consider accepting a “sub-optimal” role to provide them with work experience.

He is a fan of internships, even if unpaid, with Revlon operating an unpaid programme for many years in the US. Equally, he recommends calculated compromise on location, such as his own move to Manchester from Dublin in 1997.

In economic terms, the timing of his emigration meant Ennis “missed the ride all the way to the top and missed the crash down”. Looking in from the outside, he says the State’s financial malady has been handled well “in comparison to how it could have been handled”.

He says Irish people are very “pragmatic”, having recognised the “missteps” of the past and taken corrective action. He has no sympathy however for borrowers who accept no responsibility in post-apocalyptic Ireland.

“The banks lent money to people and people borrowed that money,” he says, advising that some individuals could spend a little more time “looking in the mirror”.

Summing this up as a “tendency to blame institutions a bit more than blaming the individual”, Ennis also acknowledges the political difficulties faced by German chancellor, Angela Merkel, in the context of euro bailouts. She is “under tremendous pressure at home”, he says.

It might be hard to find a receptive audience for such comments in Ireland, particularly when they come from a man who was paid an eye-watering $3 million last year, but Ennis is allergic to any sense of entitlement.

He recalls the wage of less than €7,000 he was paid for his first year in Arthur Andersen, a period not all that long ago, but a world away in terms of his own hard slog and determination.

Ennis reckons he will be happy in Revlon for a good while yet, but his career history suggests he wouldn’t pass on an elevation if the right “educated chance” presented itself.

“Whether you’re making a lipstick or a ball-bearing, within the business world, it doesn’t matter really,” he says.