Twenty-four businesses ranging from financial services and technology to agriculture and manufacturing have been shortlisted for this year’s Ernst & Young Entrepreneur of the Year (EOY) awards. 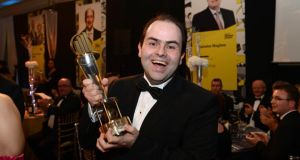 Four of these businesses – Datahug, Barracuda FX, Sugru and Sixteen South - which are finalists in the emerging category of the Ernst & Young Entrepreneur of the Year competition, are profiled today. Overall eight companies have been chosen as finalists in each of the three award categories: international, industry and emerging.

All 24 finalists will join a group of 100 entrepreneurs, all previous finalists and winners of the EOY competition, for a week-long CEO retreat taking place between Chicago, Notre Dame University and New York in June.

The theme of the retreat is “accelerating the growth, ambition and development of Ireland’s leading entrepreneurial talent and their businesses,” according to Frank O’Keeffe, partner in charge of the Entrepreneur of the Year programme.

“The week will include world-class executive education sessions with globally renowned experts in growth and internationalisation, as well as master classes with CEOs of some of the world’s biggest multinationals,” he said.

The awards, which are now in their 16th year, aim to recognise and acclaim Ireland’s entrepreneurs. They are run in association with The Irish Times, RTÉ, Enterprise Ireland, InterTradeIreland and Invest Northern Ireland.

Four finalist companies will be profiled in the business section of The Irish Times each Monday over the next six weeks.

1 I want to change my will quickly in case I fall ill. Do I need a lawyer?
2 EU finance ministers hold marathon talks to overcome eurobonds split
3 Coronavirus: Property rental in the jaws of the epidemic
4 Firms in row with Irish Distillers must provide €1m in security
5 Cold water poured on idea of ‘helicopter money’
6 Coronavirus: Aldi eases restrictions on purchasing products
7 MCD’s Desmond ‘optimistic’ that Electric Picnic 2020 will go ahead
8 Collison brothers worth an estimated €2.9bn each
9 Workers may face tax bill on emergency State wage subsidy
10 How can the State support me now I’ve lost my job?
Real news has value SUBSCRIBE