Brexit: 'Hands off Donegal and give us our six counties back'

The Guardian ran a map of the new-look EU on its front page, but they’re playing fast and loose with Irish geography 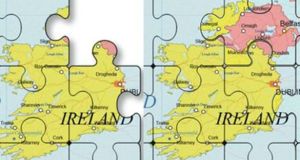 Thanks to Article 50 being invoked, Britain may finally be stepping into the unknown today, but if you’re in Newry and didn’t vote for Brexit, you needn’t be overly alarmed. Well, that’s according to today’s Guardian’s front page at any rate.

It’s an inspired cover ; one destined to become an iconic image. With their map made of jigsaw pieces, the Guardian’s designers, in their infinite wisdom, have decided to leave Newry, south Tyrone and a small sliver of south Co Down as part of the EU. Meanwhile, Dundalk, Donegal, Wicklow, Cavan and Arklow have all, according to this image at least, suddenly become Brexit casualties.

Kudos for the clever idea folks, but you have made an absolute hames of the place. Anyone who thought that taking over the three remaining counties of Ulster would be a difficult feat should have had a word with the Guardian layout folks first.

I get it. A Northern Ireland-shaped jigsaw piece doesn’t exist; not yet, at any rate. But we’re playing fast and loose with geography here. Smaller jigsaw pieces might have left us with more of the country, but really, something was always going to give.

Those Guardian designers even managed to shrug off the Eastern EU member states and snaffle a bit of northern France too, the scamps.

@guardian hands off Donegal and give us our six counties back too.

Donegal TD Pearse Doherty was first out of the gate with a reaction: “Hands off Donegal and give us our six counties back,” he tweeted.

We in Ireland haven’t been particularly demonstrative with our affections when it comes to Cavan, but we’d like them back, too. They have incredible creameries, you know.

Seriously though, could you only imagine a scenario in which Donegal, or many of these other areas for that matter, did become part of Brexit Britain? There’d be an import tax on Football Special and Donegal Catch, for a start. Wee Daniel O’D might need an EU work permit to play the INEC. Gaelic football finals with the Donegal team in them are tense enough without bringing Brexit into it.

And what about the public money spent on jazzing up the Wild Atlantic Way? Would that become Brexit Britain’s bounty now? Wold Dundalk FC still be allowed in the League of Ireland’s Premier Division, or would they have to endure a pummelling from Arsenal instead?

Down in Greystones, the Happy Pear lads would need to start taking sterling for their quinoa cassoulets and raw cacao thingies (will this make them any cheaper, I wonder?). Day-trips to Wicklow would be a logistical nightmare, and would involve a trip to the bureau de change first.

On the upside, we might just get NHS services in Dundalk. Free dental work and doctor’s appointments an hour’s drive up the road?  I suppose that could work.

Theresa May has pledged that there would be no hard borders between Northern Ireland and the South on account of Brexit, and it’s just as well. Could you only imagine a trip from Arklow to Donegal, with not one but two bounces in and out of the country?

Still, at least there are no shortage of decent pubs in Sligo, Leitrim, Cavan or Monaghan in which those living in the new-look Britain could drink their troubles away. Because now that Article 50 has finally been triggered, those troubles could well be coming thick and fast.