We continue our trip backwards through time with a peerless melodrama

The phrase “Woman’s Picture” has gone out of fashion in recent decades. Come to think of it, the words haven’t really meant much since the 1950s. In recent years, the notion of a mainstream film aimed at a female audience became somewhat debased as the romantic comedy genre — among Hollywood’s most durable — debased itself into the horrific chick flick. You remember those. Some poor woman struggles to make sense of a life that (it seems) can’t possibly make sense without a man about the place. Those films seem now to have been killed off by their own wretchedness.

Anyway, the “Women’s Pictures” that Warner Brothers perfected in the 1930s and 1940s were very, very different, much less patronising pieces of work. The genre’s title referred, you feel, more to the films’ subjects than their target audience. A man could, surely, savour a film like Stella Dallas or Mildred Pierce (based on a novel by none-more-hardboiled James M Cain, after all) every bit as much as his female friend. The pictures so described tended to follow strong, independent women as they pummelled their way through a male world. They starred such indomitable actors as Barbara Stanwyck, Joan Crawford and, of course, Bette Davis. 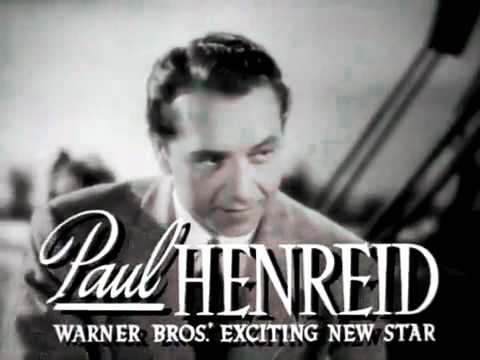 Irving Rapper’s utterly fabulous Now, Voyager looks, in some ways, like the origin story of one such woman. The picture begins with poor Charlotte Vale in a very different place. Confined and humiliated by a mother fearsome enough to be played by the great Gladys Cooper (then still in her mid-fifties, terrifyingly), she spends her time carving ivory boxes and, we later learn, taking occasional shots of something called “medicinal sherry”. Her sister has decided that Charlotte is not well and has invited a top psychiatrist (Claude Rains) round to surreptitiously assess her condition. Having had a gawp at mother, he concludes she is most seriously ill and carts her off to a quiet retreat in the country. Her slow recovery takes in a trip to South America where she meets and falls for suave Jeremiah Duvaux Durrance (Paul Henreid). Unfortunately, he is married to a ghastly woman. We fear that, as is so often the case in classic “Women’s Pictures”, eternal self-sacrifice is looming over the horizon. So it eventually proves.

There is plenty in Now Voyager — based on a forgotten novel by Olive Higgins Prouty, author of Stella Dallas — that we now find ourselves laughing at. Ms Prouty was seen as a bit of a pioneer for introducing psychotherapy into fiction. But Rains’s Dr. Jaquith strikes us as the worst sort of head shrinker. He encourages Charlotte to smoke. He breaks her glasses. When he eventually meets Durrance’s troubled daughter he behaves like a veritable tyrant. The terrible trauma that follows an evening Jerry and Charlotte spend together in a shed — what can they have been doing? — is even more comic to modern ears.

Forget all that. Now Voyager is utterly sincere in the play of its characters’ emotions. Charlotte Vale seems like as much of a signature Hollywood character as Sam Spade or Scarlett O’Hara. Like them, she travels along a clean vector, but still manages to drip personality with every worried step. Much of this is, of course, down to the extraordinary depth of Bette Davis’s will. Katharine Hepburn was funnier. Barbara Stanwyck was more exotic. But neither of those brilliant actors could convey quite so much human force on the screen. We became increasingly used to Davis turning that force to malign purpose: as the bitchy Margot Channing in All About Eve; as the positively poisonous Jane in Whatever Happened to Baby Jane. Back in 1942, she was still allowed to be the sanest person in the room. The real wonder of Davis’s performance, however, is as the fragile version of Charlotte in the early scenes. Bette Davis, fragile? Few stranger things have been seen on screen.

The film is, also, of course a great romance and is justifiably famous for cigarette business and an untouchable final line. As he has before, Jerry puts two fags in his mouth, lights them both and then passes one to Charlotte. They go to the window. He wonder if they will be happy. “Oh Jerry. Don’t let’s ask for the moon; we have the stars,” she replies. It was 1942. A great many people were learning to settle for less than they might one day have hoped.

For 1942 we also considered Bambi, Casablanca, The Magnificent Ambersons, Sullivan’s Travels, Went the Day Well?, Woman of the Year and Cat People.