A glimpse of Gary Oldman as George Smiley.

You may not care, but a sad cadre of maniacs — let’s call ourselves The Lamplighters — are faintly obsessed with Tomas Alfredson’s upcoming adaptation of John Le Carré’s Tinker Tailor Soldier Spy. I’m not altogether sure the film version …

You may not care, but a sad cadre of maniacs — let’s call ourselves The Lamplighters — are faintly obsessed with Tomas Alfredson’s upcoming adaptation of John Le Carré’s Tinker Tailor Soldier Spy. I’m not altogether sure the film version is a good idea, mind. Packing all that information into two hours is going to require a near supernatural degree of creative compression. The legendary 1979 TV series moved every comma, dash and colon from novel to screenplay. There were some subtle changes, but the BBC’s team worked hard at leaving almost nothing out. That’s fine on TV. But the dynamics of film are very different. If you want a demonstration then set the classic series of Brideshead Revisited against the recent, supernaturally ghastly film take on Evelyn Waugh’s book.

Of course, the writers on Alfredson’s Tinker Tailor may have come up with a mighty wheeze — some way of radically reinventing the tale. If so, good luck to them. For the second time in two posts I will repeat the mantra: fidelity to the source material is not a virtue in itself.

Anyway, everyone loves discussing casting possibilities for adaptations of their favourite novels and, to date, the actors drafted in for Tinker Tailor seem well chosen. As everybody will note, Gary Oldman could not look less like Le Carré’s Smiley — short and fat in the manner of Arthur Lowe — but he can manage just the right class of weary wisdom. Interestingly, in this first image from the set, he appears to be wearing the same spectacles that Alec Guinness sported in the series.

Oldman is also a bit young. Indeed, the characters all seem to have had a decade docked off their ages. Is this a sign of the times? Back in the 1970s, when the book and series emerged, the British expected their leaders to be in the later stages of middle-age. Since then the likes of Edward Heath and Harold Wilson have given way to  babyish Tony Blair and the near-embryonic David Cameron. (Come to think of it, this is the first time a British Prime Minister has been younger than your current correspondent.)

If you remain unaware of Le Carré’s masterwork, you will, after glancing at that staggering cast list, get some sense of how highly regarded the material is. The casting does all seem top notch, but there is still that worry about age. So many of the characters — Jim Prideaux in particular — are defined by a sense of being left behind by history. Can it work? Well, having directed Let the Right One In, Mr Alfredson does appear to be on a roll. Alas, we won’t know until well into next year.

Hey, I used to work in the building from which (I think) the first shot in this clip was taken… 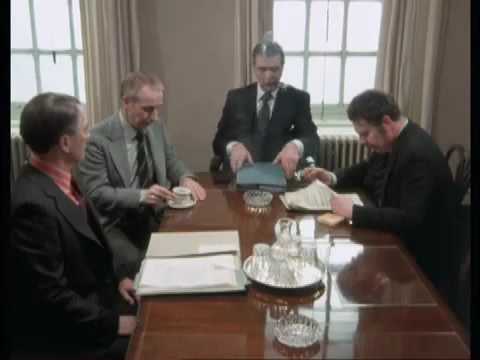