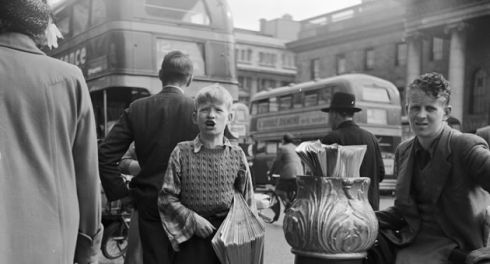 Myth and legend suggest that The Irish Times in the old days was a languid series of long (very long) lunches, pub lock-ins and generally anarchic behaviour, interspersed with high-flown editorials, onslaughts on the bishops and interminable Dáil reports.

Gerry Mulvey, among the paper's longest-surviving veterans, who worked as a Dáil reporter for many years and retired as an assistant editor after many years as news editor, quibbles somewhat with that version. He began in the newsroom in 1947 when he was 27, armed with shorthand of 120 words per minute and was in the Dáil for the historic "mother and child" debate. He worked in a time when the word "rape" was forbidden in a newspaper – "You'd say 'a man was charged with a very serious offence against a young lady' – and the Irish Independent primly abbreviated "artificial insemination" to AI because "insemination" was far too risqué. Prevailing attitudes to openness and transparency may be gleaned from a garda's reaction to Mulvey's request for an update on flood conditions around Killaloe: "By the regulations, we are prohibited from giving the information but if you put your query in writing and submit it to the GIS (Government Information Service), they will contact us and in due course, you will get your reply."

Which brings us back, perhaps, to why stories of the old days of Editor Bertie Smyllie et al are invariably wreathed in alcohol fumes. Mulvey remembers them as a time when reporters worked 10 to 14 hour-days for such low wages that many couldn't afford to get married.

And, in his view, therein lay the root of the heavy drinking culture. "You worked up to 14-hour days but you wouldn't be working solidly right through. You might be marked for the courts in the morning and they would rise at 4 o'clock. You handed in your copy and then you'd find you had to cover a meeting of some university society at 8pm. So there was this big gap. You were free from half-four and time was too short even to go to the pictures. So what could you do only go to the pub?"

It was a culture that ruined many a great journalist. "In those days you had a tremendous lot of casual workers, men who never got married. They couldn't get married because the work was so casual, they would drink and had no security. Largely, some stayed casual because they were drinkers. The lifestyle bred the drinking."

So it was not the mighty craic of popular imagining, he insists. "It wasn't, because wages were so low. We were on three to four pounds a week …

"The best achievement of the NUJ (National Union of Journalists) was securing an eight-hour day under the first agreement in 1947, because it meant you were free at 6 or 7 o'clock in the evening and could organise a social life the same as everybody else. And wages went up to 11 guineas – 11 pounds and 11 shillings – a week, which doubled the pay for some." To put that in perspective, senior reporters were earning about the same as a TD, although TDs still won of course, since for some reason, they got a "big lump" of their salaries tax-free. "But we'd done exceptionally well. For the first three months, everyone was drunk – they got four to five month's back money and they didn't know what to do with it. Everybody just blew it."

After that blow-out, a new era dawned in which men got married, got sense and left the pubs such as the Palace, the Pearl and Bowe's bereft of custom.

Or so Mulvey suggests. "The majority of journalists wanted a steady life. The pubs were empty", he says. Empty ? "Okay, the drinking dropped a lot", he concedes. "And a lot of them did get married, because they got the extra money. Ah no, it didn't stop but let's say, more sane drinking went on. But, sure – the drinking culture remained. It was a great socialising vehicle when your night's work was done to go over to the Pearl and stay till closing time."Just till closing time ? "Well, there were lock-ins. In Bowe's, Tommy would close the door at 11 o'clock and you'd be there till 3 or 4 in the morning. Then you had the Irish Times Club. If you were on the 3 to 11 shift, you went up there for a late one …"

Not to mention the long lunches. "There were always long lunches. That was largely an Irish Times sin. It certainly didn't happen as much in the Press or the Independent because they had an evening paper to produce and it was all go. But The Irish Times could have a more leisurely approach. You knew you had your day's work done – or a good part of it – by 1 or half one so we'd go and get a 'sandwich' – a euphemism", he grins, "in the Palace, the Pearl or Bowe's. And maybe have a meal. But plenty of drink."

"Sure if we're in the Pearl, they know where we are," said Cathal O'Shannon in those languid pre-mobile phone days, about editors who might be in search of a reporter or two. "And that was okay", says Mulvey. "Of course it was … People still filed their copy. It was just talking. Well, talking and drinking. It was really social drinking. You wanted to talk to somebody over a drink. You weren't tossing drinks back by any means ..."

That anarchic era seemed to play itself out at around the time the roar of the linotypes faded, the bashing of the stone on the metal and the clattering of typewriters gave way to the eerily silent new technology, thinks Mulvey. He is wistful for it still.