THE WORKER: The writer spent two summers working in the newspaper and lived to tell the tale 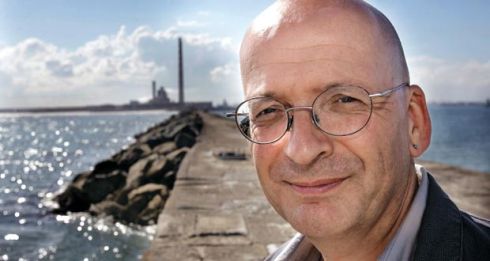 I was the e-mail. I'd pick up a piece of paper and carry it from one desk to another desk, usually from one part of the building to another, or sometimes to a desk in another part of the city. Other times, the desks were in the same small room, although the men behind the desks were worlds apart. In those days -- the summers of 1975 and 1976 -- the e-mail was called the office boy.

Sometimes I'd carry an attachment or envelope, as attachments were called in the Seventies. Carrying the envelope was rarely a problem. But collecting the thing often was.

- Go down and collect Martyn Turner's cartoon off the Belfast train. Stay there until they give it to you.

I can't remember who gave me the instruction, but I went down to the depot on Sheriff Street, behind Amiens Street Station, and asked for the Irish Times envelope. No, I was told, it hadn't come in. I stood there, because I'd been told to stay until I'd been given the envelope, and because I could see it, on the table behind the man who'd just told me it wasn't there, large, brown, and full of satire, "Irish Times" clearly printed on it, presumably by Martyn Turner himself. I remember standing there for hours, although it was probably minutes. I remember it as a daily occurrence. Not just in Amiens Street, but in Kingsbridge too I'd stand at the counter until one of the lads picked up the envelope, and put it down, and waited until I asked for it again. I'd started reading Flann O' Brien, so it all made sense. And I liked getting out. The job came with a commuter ticket, but I usually walked down to Kingsbridge, and back. I don't remember anyone asking why I'd been gone for two or three hours. I walked to the Four Courts, to collect copy, and out to the RDS during the Horse Show.

I was filling in for the regular office boys, who were off on their holidays. So I worked, I think, in all the departments. Sport usually generates more noise than sex and war but, in my memory, the men in Sport rarely spoke to each other. It was the quietest place on Earth. But I was happy enough there. I recall being given two important duties. One was making the tea. I don't think I made the tea in any other department, but I didn't mind. The regular office boy had refused to make it. – They can make their own fuckin' tea, he'd told me. (Twenty years later, when I was writing The Woman Who Walked Into Doors, that line came out of its hiding place. Make your own fuckin' tea, the narrator Paula Spencer says to her husband, Charlo, just before he hits her.) The other duty was taking down the dog results. I was told to sit at the phone; it would ring at 9.10pm. And it did. The man at the other end, in Shelbourne Park or Harold's Cross, gave me the winners and the odds. I never met him, never knew his name, but I liked him.

- Got your pen ready?
- Yeah.
- 7.00. Shepherd's Delight, 2 to 1.
In my mind, he wore a cap.
Property was boring but I got out a lot, collecting photographs of houses from the auctioneers. It was in Property that I learnt the most dishonest word in the English language, adjacent , or adj . I liked the names of the auctioneers, especially Jackson, Stops and McCabe. I could see them, Ireland's Crosby, Stills and Nash, adj. all amenities and guitars.

Photography was my favourite. The darkroom was a fantastic place, and the men who ruled it were hilarious. No one laughed in Sport but, down the corridor, they never stopped. Dick Butler and Terry Thorp were a comedy team without the straight man. At 16, the only adult men I encountered, excluding my father, were Christian Brothers and lay teachers. Some of the teachers were okay but they weren't a great ad for the adult state. Sarcastic, fanatical, bored, boring, hungover -- only one of my teachers was all five of these things, always, but most of them were some of those things, often.

I know now that I was lucky to meet several very nice men in The Irish Times, to watch them work, to see how they got on with each other, how they lived. Terry and Dick were two of the nicest. The slagging was always affectionate, the orders were polite, and laughter was like air or water - essential. The photographers were great too. They'd arrive in from the outside world, carrying equipment and news, looking like they were just back from Vietnam when they'd only been out at the Horse Show. One day, a photographer came in with a roll of film, shots he'd taken of a woman who'd been in a couple of episodes of The Riordans, in the nip. Not for the paper, for art. I was let into the dark room with the grownups, and we watched as the white paper turned grey; then vague shapes emerged, and became sharper; it was a woman, definitely a woman, a skinny woman, but a woman, with breasts and two nipples. That was a big day.

Then there was the News Room. I recall a huge desk at one end of the room, usually manned by the news editor, Gerry Mulvey, another of the nice men. I sat at a smaller desk near him and read a book or the paper. He often apologised when he wanted me to go on a message. I remember the News Room as vast, desk after desk after desk. I never detected a strict pecking order in the room itself, although there were offices to the side. Important men went in, and rarely came out. I'd soon divided the News Room staff in two, the ones who said Hello and the ones who didn' t. The men and women who worked at desks in the main room almost always said Hello; the men with the offices never did. There were a lot of young women working there at the time, although I was too young myself to know that they were young. Elgy Gillespie always said Hello; she sat and chatted, for hours. Maev Kennedy said Hello. So did Geraldine Kennedy.

The sub-editors were at the back of the room, and they looked like a big gang of teachers in their holiday clothes, doing corrections. Some of them brought in their own dictionaries, in briefcases. Even then, I thought this was hilarious.

Two other days stand out, one bad, the other brilliant. I was at work the day after the Miami showband massacre and I was sent up to Parnell Square, to their management office, to collect a photograph of the band. The newsroom was very quiet that day. The city was quiet that day. Another day, I was in the queue in the canteen. One of the women behind the hatch was frying a load of sausages. There was a compositor right behind me in the queue. He leaned against me, put his mouth right up to my ear.
- Ah, he said. Look at all the widows' memories, sizzling in the pan.
Thirty-four years later, it's still one of the funniest things I ever heard.