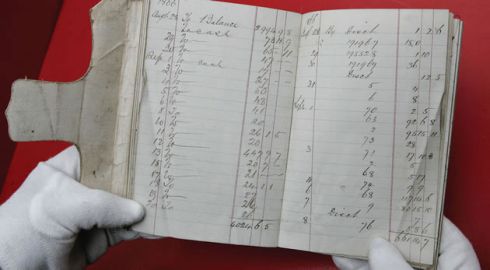 Pages from the bank book of Lawrence Knox which is held in the Patrick Barry Moloney Archive in UCD. Photograph: Matt Kavanagh

Lawrence Edward Knox (1836–73), founder of The Irish Times, was born on November 7th, 1836, at Kemp Town, Brighton, England. He was the elder of two sons and three daughters of Arthur Edward Knox, a Life Guards officer, of Castlerea, Co Roscommon, and Trotton House, Sussex, and his wife Jane, daughter of Lawrence Parsons, the second earl of Rosse. (Arthur Knox sold his Irish estates, comprising over 40,000 acres in the Encumbered Estates Court in 1853.)

Interested in a life of adventure, at the age of 16 Lawrence joined the Royal Navy as a midshipman. Following his father into a career in the army, at the start of the Crimean War he became an ensign in the 63rd Regiment of Foot on August 25th 1854) and was gazetted a lieutenant in December. Promoted to captain in the 11th Regiment on January 15th, 1857, he was placed on half-pay and left the army the following year.

In 1859, at the age of 22, he founded The Irish Times. The name was chosen for two reasons: the first was the standing of the London Times, but the second was the brief success of an earlier Irish Times in the 1820s. For the first 14 weeks, the newspaper was published on Tuesdays, Thursdays, and Saturdays, but on June 8th, it became a daily newspaper. It was a time of growing prosperity in the newspaper industry, and the paper soon won a large and enduring readership.

Initially the paper reflected the views of its founder and described itself as a "new conservative daily newspaper". But despite its unionist leanings, what distinguished Knox's paper from others in the period was its moderation and balance when reporting on major issues, and this was a major factor in its success.

Missing the military life, he became a major in the 2nd Royal Tower Hamlets Militia (1866–70). He was also a justice of the peace for County Dublin. Entering politics, he was elected Tory MP for Sligo borough (November 1868), but was unseated by petition. Interested in many sports, he was commodore of the Irish Model Yacht Club.

He died January 24th, 1873, aged just 36, at Fitzwilliam Square, Dublin, of scarlatina, complicated by congestion of the lungs. British and Irish newspapers were unanimous in their tributes: his own paper noted "We can only record his loss; we are unable to express our sense of it" (January 25th, 1873). He married (August 13th, 1858) his cousin Clare Charlotte, second daughter of Colonel Ernest Knox, of Castlerea, Co. Roscommon. They had no children.

This is an edited version of the entry on Lawrence Knox, written by Patrick M. Geoghegan, in the Royal Irish Academy's Dictionary of Irish Biography, which will be published later this year by Cambridge University Press.