The 1916 Rising as you have never seen it before

Illustrator David Rooney has created 42 sketches documenting the Easter Rising. This animation of the pictures is accompanied by a song recorded by Rooney to commemorate the event. Video: RIA 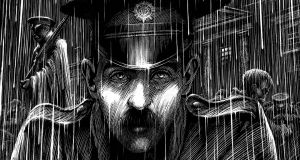 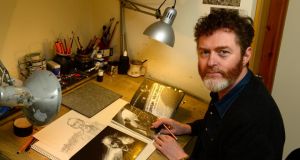 At work: David Rooney in his studio. Photograph: Cyril Byrne 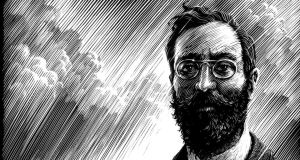 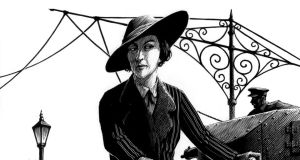 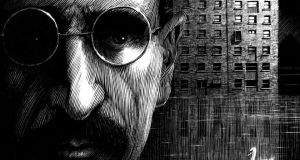 By his own account David Rooney was an unlikely person to be asked to illustrate a book about the men and women of 1916. “For me growing up, everything associated with 1916 was coloured by the Troubles,” he says.

“My dad grew up near Enniskillen, and came down here to join the guards, getting away from the poisoned land, as he saw it, of sectarianism in the North. And I wouldn’t be alone in this: many people of my generation would have a real repugnance about the continuation of violence.”

But when Rooney got into the nitty-gritty of his research for the project he was fascinated by what he discovered.

“I’ve been reading the 1916 stories for more than a year, and there are so many instances where everything changed in people’s lives – and the lives of everyone around them. They fragmented, altered, spun off in all sorts of directions.

“Maybe the anvil of an event like this produces really extraordinary arcs of story – or maybe the stories always happen, and we just don’t register it. But when war happens, when conflict happens, the natural trajectory of things is altered. Like the refugee situation now. And we’re still living in the broken mirror of 1916.”

Rooney’s 42 thoughtful black-and-white drawings give the book 1916 Portraits and Lives, a collection of biographical essays published by the Royal Irish Academy and based on the academy’s Dictionary of Irish Biography, a visual – and, indeed, emotional – heft that helps it stand out from this year’s 1916 publications.

Originally the plan was to use photographs of the characters concerned, but in some cases the available imagery was of poor quality or simply nonexistent. So the academy’s graphic designer, Fidelma Slattery, had the idea of using original artwork.

Its managing editor, Ruth Hegarty, ran with the idea, and Jackie Moore of the Office of Public Works – “the third part of that triumvirate of powerful women”, as Rooney puts it – came on board to support the project by buying the originals for the State.

How did Rooney get so up close and personal with his subjects?

“A friend of mine told me to read James Stephens’s The Insurrection in Dublin. That had a huge impact on the colour of it, because Stephens’s account is really what a journalist would do now.

“It’s moment by moment. ‘Here I am on the corner of Abbey Street . . .’ It’s amazing – and an amazingly neglected document.”

The 1916 Portraits and Lives project has taken off to such an extent that it now has a life of its own.

The book won a design award and was shortlisted for the 2015 Bord Gáis Energy Book of the Year.

The ebook was made available for free download, and such was the uptake – more than 65,000 copies downloaded worldwide – that the offer has been extended until the end of April.

Limited-edition prints of the portraits are available to buy from the Royal Irish Academy’s website, and the originals will be on display at an exhibition in Kilmainham Gaol from May 12th.

As for Rooney himself, after 30 years as a visual artist, the illustrator with the highly distinctive visual “voice” is now developing another voice – as a singer-songwriter.

“There have always been guitars around, and I liked the idea of writing songs but didn’t know where to go to find them.”

A chance meeting with Glen Hansard changed all that. “I went over to his house, and I saw him working on the songs that became his Grammy-nominated album [Didn’t He Ramble]. To see them as pencil sketches – well, I recognised something in that.

“I thought, I know where to find my songs. They’re in the same well as the drawings, but much further down – and much harder to get at.”

Hansard has become a close friend and a constant source of musical inspiration.

And with Declan O’Rourke producing and a band that includes the jazz drummer Conor Guilfoyle and the pianist Jay Wilson, who plays with James Vincent McMorrow, Rooney has now recorded 10 songs for an album due to be released this autumn.

“It has been an absolutely incredible journey. With the drawings the best ones come if I get out of the way and let it flow. With music I have to be totally present at all stages of it.”

As for recording and performing, that’s a collaborative process that is a shock to a perfectionist who is used to working at home alone.

“I’m in total control of the images. With the music I have to let go. Take that de Valera image. If that was music, okay, I get to do de Valera, but I’ve to get you to do the swan, because you’re the person who can do swans.

“While we’re rehearsing, the swan is exactly like it’s going to be here. And then comes the day of recording, and you’re thinking more of a goose. ‘Why does it have to be a swan,’ you say. ‘Can’t it be a cormorant or . . . a shag, maybe’?” He laughs. “Yeah. And you have just to say, ‘Okay. Let’s try that’.”

Every picture tells a story: David Rooney on four of his portraits

1 Francis Sheehy-Skeffington: “For me he represents the Ireland that could have been. Those who were lost: the idealists and the liberals.

“He’s described first and foremost as a feminist, so that was the departure point for the portrait. His badge says Votes for Women. In 1916 the style of clothing was very dark, very heavy; women were very controlled by what they were wearing.

“And I saw parallels between that and the Middle East. This drawing expresses the sadness of the fact that it could all have turned out very differently – but women were herded back into the roles that they had been in, and several generations went by, so the country that I grew up in was dominated by men.”

2 Margaret Skinnider: “Not being a sporty kid, my escape at school when I got to the age of 12 was to make military models.

“I would have made a Rolls-Royce armoured car, so I knew it intimately, and it’s an iconic vehicle of that period, the Rising and the War of Independence.

“In the drawing all these things are made of iron: the bicycle, the armoured car, the wrought-iron tram cable, the lamp. Margaret Skinnider was always elegantly dressed, cycling around Dublin.

“She was also a crack shot, and there are stories of her having to be persuaded not to cycle up in her fancy regalia and throw hand grenades into the Shelbourne Hotel.”

3 Edward Daly: “This is when they were all gathered up following the surrender, and they were left out in the pouring rain at the Rotunda Hospital.

“It must have been a terrible scene. I often think that when they walked out and wheeled around up O’Connell Street they probably hadn’t had an overview of what the city looked like until that morning.

“And then there must have been doubts given what they witnessed of the state of the place and the reaction they’d had from the locals.”

4 Éamon de Valera: “My grandfather hated de Valera to the point where, when I was a small child, I would delight in watching his reaction to Dev on television.

“It’s funny how these childhood memories are so powerful. I had to dig deep to fight against the prejudice I had against Dev, and to find the revolutionary in him. So I was happy when he started to emerge from the darkness.

“I always love the moment where it’s cloudy or stormy and there’s a shaft of light coming through, and you know it’s only momentary.

“Behind Bolands Mill the sky is full of black smoke, and the black smoke is the Iraq War. It’s oilfields burning. It crops up again and again.”

1916 Portraits and Lives is available in bookshops, priced €30, or as a free download from ireland.ie/portraits. Limited-edition prints are available from the Royal Irish Academy’s website at ria.ie/1916portraits. The original drawings go on show at Kilmainham Gaol on May 12th. David Rooney’s song The Rising is scheduled for release this autumn as part of his album 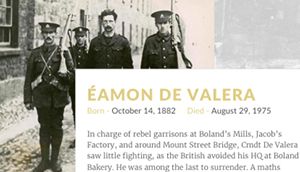 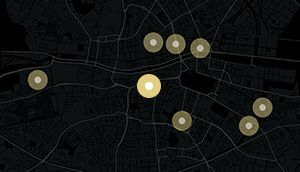 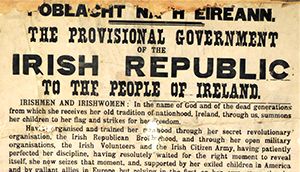 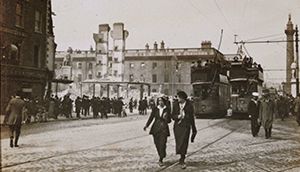 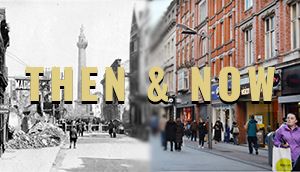 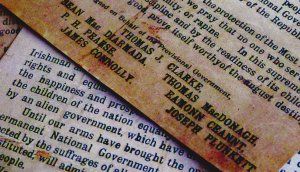 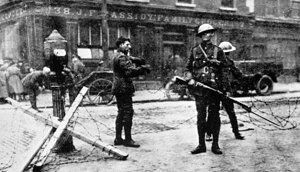 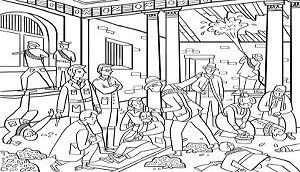